Meet author Cristina Alger & THIS WAS NOT THE PLAN 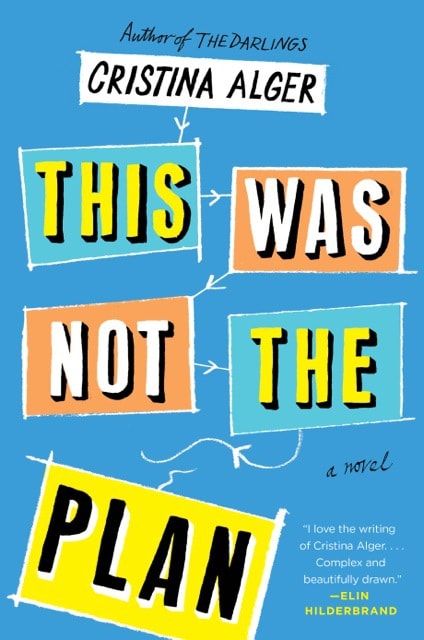 Let’s give a warm welcome to Cristina Alger, who joins us on the Poppy blog today! Cristina has penned two novels and her second, THIS WAS NOT THE PLAN (Simon & Schuster/Touchstone, February 2016), was described by Bookpage as “a big, heartfelt book that reads like your favorite sitcom….Charlie’s evolution to a secure, confident, stay-at-home dad is wonderfully satisfying, and he is as relatable as Will Freeman in Nick Hornby’s About a Boy” and by Library Journal as a “darkly comic novel offer(ing) an engaging take on single parenthood from a man’s viewpoint.” (I agree — I devoured it!)

Cristina stopped by to take our Tall Poppy Q&A, where she talks about what’s making her happy these days, what books are on her nightstand, and her twisty path to publication…

Talk about one book that has made an impact on you.

Jonathan Evison’s THE REVISED FUNDAMENTALS OF CAREGIVING has stayed with me for years. It’s such a beautiful, brilliant book. Evison is a master at blending humor and pathos. Whenever anyone asks me what I like to read – or what I aspire to write – this is the book that comes to mind first.

Talk about one thing that’s making you happy right now?

My six-month old son, Owen. He’s my little miracle. Owen was diagnosed with a severe heart defect in utero. He had open-heart surgery three days after he was born, and it was the scariest experience of my life. Today, though, he’s happy, healthy and thriving. Every time he smiles, my heart just overflows with gratitude.

The road to publication is twisty at best — tell us about some of your twists.

So many twists! So many turns! Where to begin? After I published my first novel, THE DARLINGS, I sold a second novel based on an outline to my editor. It was a thriller in the same vein as THE DARLINGS and I thought I had the whole thing mapped out neatly in my head. Shortly thereafter, I got married and came back from the honeymoon pregnant with my daughter, Emma (surprise!). As it turns out, I’m a terrible pregnant person. I get very fat and slow and my mind moves at the speed of molasses. So the months ticked by and I just couldn’t write a coherent sentence. Then Emma was born, and oh my God she cried every single second she was awake. In a fit of despair, I gave back my advance and resigned myself to the idea of being a one-book novelist. Eventually, after we all started sleeping through the night, I got the urge to write again. This time, I decided I wanted to write something funny and that felt relevant to me at that moment in my life. So instead of returning to the thriller – which, by the way, was almost finished – I started working on something new entirely: a comedy about a workaholic who felt like he was failing at parenthood. I wrote THIS WAS NOT THE PLAN very quickly, mostly at night after my daughter was asleep. I was terrified to show it to my agent because it was so different than my first novel and I thought she might hate it. Fortunately, she didn’t and the rest is history.

My kids. My daughter – she’s three now – is incredibly bossy. I love listening to her lecture her six-month old brother. Usually she chastises him for something she herself did earlier in the day. “Baby Owen! You need to listen to your teachers! You’re not allowed to skip down the steps, Baby Owen! If you throw your shoes, Baby Owen, Mommy will be mad and put you on a time out!”

My nightstand is overflowing right now! I just finished I LIKE YOU JUST FINE WHEN YOU’RE NOT AROUND by Ann Garvin and BE FRANK WITH ME by Julia Claiborne Johnson, both of which I loved. Next on my list: LILY AND THE OCTOPUS by Steven Rowley.

Thanks for stopping by, Cristina!

Cristina Alger is the author of THE DARLINGS (Penguin/Viking Press, 2012) and THIS WAS NOT THE PLAN (Simon & Schuster/Touchstone, 2016). In a previous life, she was a corporate attorney. She lives in New York City, where she was born and raised, with her husband and two young children. When she’s not at the playground or fixing someone a snack, she’s at work on her third novel. Connect with Cristina on her website, and get social on Facebook and Twitter.