It’s #PreFridayReads when a Tall Poppy author recommends a book she loved. So if you’re looking for a great recommendation for your #FridayReads or another book to meet your 2017 Poppy Reading Challenge, read on.

We’ll help you turn the page … 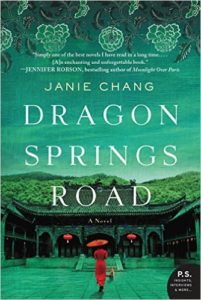 I first fell in love with Janie Chang’s writing when I read her debut book Three Souls, so when I heard she’s releasing her second book, I was beyond excited. I love Janie Chang’s poetic language rich with imagery. She also excels in writing historical novels with supernatural elements. In Three Souls, the narrator is a ghost, and in Dragon Springs Road, it features a fox spirit.

If you’re familiar with the Chinese culture, then you’ll know fox spirits have a rather unfavorable reputation in Chinese folklore. Popularized by Pu Songling’s Liao Zai Zhi Yi, Strange Tales from a Chinese Studio, many people in ancient China believed fox spirits loved to disguise as young and attractive women to seduce and ruin innocent young men. Sounds interesting, right? But in Dragon Springs Road, Janie Chang would portray another facade of the fox spirit, which is not only humane, also intriguing.

Dragon Spring Road was just released in January, and here’s the backcover copy as written on Goodreads!

In 1908, Jialing is only seven years old when she is abandoned in the courtyard of a once-lavish estate outside Shanghai. Jialing is zazhong—Eurasian—and faces a lifetime of contempt from both Chinese and Europeans. Until now she’s led a secluded life behind courtyard walls, but without her mother’s protection, she can survive only if the estate’s new owners, the Yang family, agree to take her in.

Jialing finds allies in Anjuin, the eldest Yang daughter, and Fox, an animal spirit who has lived in the courtyard for centuries. But Jialing’s life as the Yangs’ bondservant changes unexpectedly when she befriends a young English girl who then mysteriously vanishes.

Murder, political intrigue, jealousy, forbidden love … Jialing confronts them all as she grows into womanhood during the tumultuous early years of the Chinese republic, always hopeful of finding her long-lost mother. Through every turn she is guided, both by Fox and by her own strength of spirit, away from the shadows of her past toward a very different fate, if she has the courage to accept it.

Grab a copy of Dragon Springs Road today and be mesmerized by Janie Chang’s gorgeous writing!

Weina Dai Randel is the author of two historical novels, The Moon in the Palace and The Empress of Bright Moon. The Moon in the Palace was nominated for Best Historical Fiction of 2016 by Goodreads Choice Awards, and for Best First Historical by RT Book Reviews Reviewers Choice Award. Born and raised in China, Weina came to the United States at the age of twenty-four. She has worked as a journalist, a magazine editor, and an adjunct professor. Find more about Weina on her television interview, The Wall Street Journal China Real Time, Library Journal, The Huffington Post, Los Angles Review of Books, and other publications, or go to her website: www.weinarandel.com.