Tell Me a Story: Batting Chapter Two Out of the Park

When I’m writing a novel, I’m careful that Chapter Two lives up to the hype of Chapter One.

No wonder the same thing happened when I barreled into Chapter Two of my life. It was critical that this second bit of my own story had momentum and meaning, even though I’d spent so much time living in Chapter One.

Just like in my fiction, I started by winging it, doing what felt right, and staying true to my ideas, although unlike with my fiction, I didn’t yet know The End.

The day my ex-husband moved out, I removed our wedding portrait from the dining room. Gingerly, but without regret, I slid the canvas onto a storage room shelf. I hung a large, framed photo of my kids in its place. Then, a friend stopped by to see how I was doing. “It’s like he was never here,” she said. I wasn’t sure if that was a compliment or a criticism.

The truth is, it would be a long time before it was “as if he was never here.” Our kids were seven and ten and lived with me. They talked to their dad every day, they talked about him every day, they had photos of him in their rooms, and there was one in the family room. He was their family, after all, and this was their home. He also took them to dinner once a week, and showed up for every practice and game. Then, when it was time for the kids to start staying with their dad every other weekend, they were excited, as they should have been, but the banter was endless. Intellectually, I knew his presence made the best of a bad situation. My kids wanted and needed to have their dad’s attention, to have him involved. That wasn’t the problem. He was eager to have the kids, and the dogs, every other Friday to Sunday. The problem was me – and that problem was mine. I had never lived alone. I commuted to college from the house I had grown up in, and had lived there until I married and moved in with my husband when I was twenty-six. (This is not a life plan I recommend, it was the eighties, not the fifties.) I had never spent so much as a weekend alone in more than a decade. Had I ever? I knew I’d never spent even a night alone in that house. That married-with-two-kids-and-two-dogs sized house.

My friends said they were envious. I was going to be alone! No kids! No dogs! For a whole weekend! An escape from reality! A break from the monotony! But, they had confused being alone with being away—away in a place you weren’t reminded of your daily grind, or even your daily glory. As I looked around my everyday/weekend dwelling, the details and images of my life seeped from its redecorated walls. There was no escaping any of it. This isn’t what anyone wanted, especially me.

The week leading up to that first “weekend at Daddy’s” was imbued with packing and planning. The kids would have their own rooms, would go to their activities and stay on their schedules, and, they didn’t have to miss their dogs. Their dad would be around more than he ever had been, which is sometimes the case with dads, after divorce. The kids asked where I would be, who I would be with, what I would be doing, if I would be okay. Of course, I would! I assured them I’d be busy but thinking about them (in a happy way!), when I had no clue how busy I would be or not be. The friends who envied me? Married with kids. Weekend days were for families. Weekend nights were for couples. Thank you for the reminder.

I had tackled the layers of divorce, both legal and personal, and had embraced my head of household status. I’d thwarted the notion of a broken home, insulted by the implication that we were less than whole. I removed the fourth chair from our kitchen table so it didn’t always seem like someone was missing, took photos of the three of us, went on nearby vacations to places we’d never been. 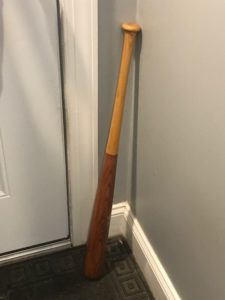 Another place I’d never been was in the house without the dogs. I wondered if I’d feel safe. I’d grown comfortable being the only adult, maybe because the pups were foreboding if you didn’t know them. Many unwanted solicitors turned on their heels at the sound of their barks. I leaned a Louisville Slugger by the front door.

As we waited for their dad to arrive on that Friday in December, I reassured the kids they’d have a blast. Headlights blared through the window and we all watched their dad walk up the path to the front door he’d said I’d painted a too-dark green. Within a minute or two, I’d hugged the kids good-bye. As they left, their other small family unit formed before my eyes. I shut the door before I saw them climb into the car without me. I leaned my back against the door the way they do in movies, and I waited for the drama to unfold inside me. It didn’t. I waited. My heart pounded. I waited more. I expected to cry. For the lump in my throat and the tightness in my chest to explode. Instead, it receded. The absence of movement and sound in the house overcame me. Not a squeak or a flush or a pitter or a patter. Not a click or a whir. When was the last time I had experienced silence without dreading its end? With my eyes still dry and my heartbeat slowing, I walked to my bedroom and fell backwards across my neatly made bed. The throw pillows were exactly where I’d left them. And then, I smiled. This wasn’t punishment for a failed marriage or a ploy to exacerbate loneliness. It wasn’t meant as a time to reflect or rehash. It was an opportunity to take care of myself. One that had been earned. And the best place to do this would be in the house where I was rebuilding my life. Now I would rebuild other parts of myself as well. I would refuel on these weekends, filling up for my weeks of single parenting, which in no way resembled “my husband is away on a business trip” single parenting. I double-checked the Louisville Slugger by the front door, drew a bath, poured a glass of pinot noir, and grabbed a book, because I had been right about one thing all along.

A version of this essay was originally published on PsychologyToday.com.