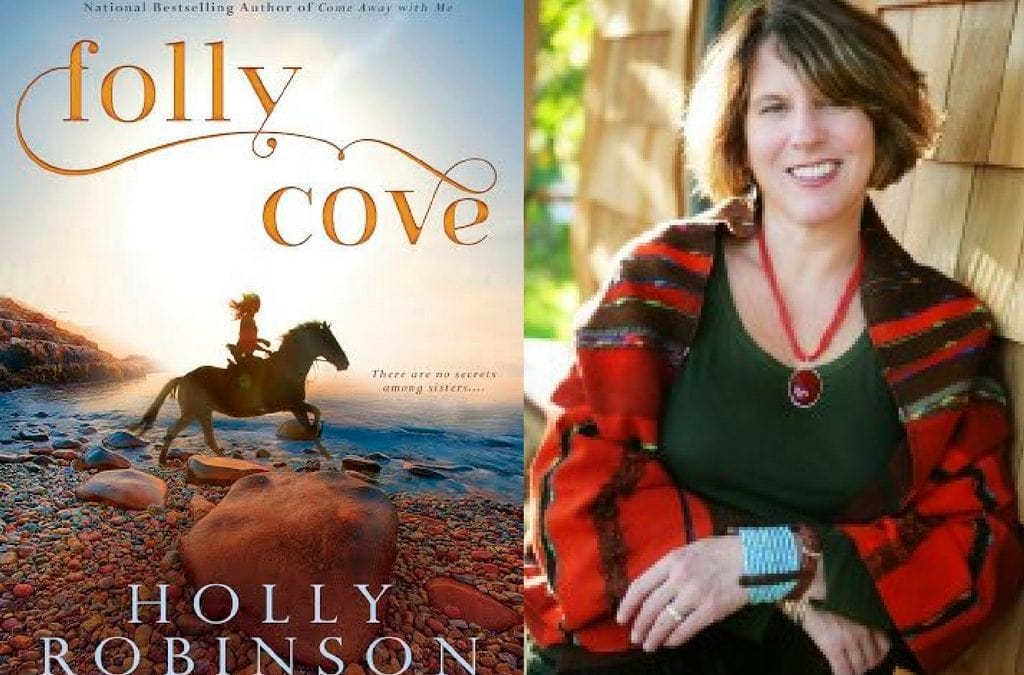 Holly’s novels are full of heart, humor and family, and her newest book, FOLLY COVE, is no different. She joins us today to discuss her favorite place, how she got into this business, and an embarrassing moment to make you laugh. 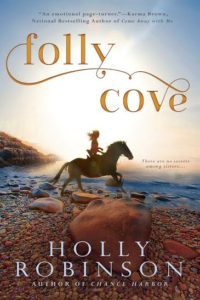 In Folly Cove, her newest novel, Holly Robinson delivers an emotional story about the Bradford sisters—famous for their beauty, their singing voices, their legendary ancestors, and their elegant mother, Sarah, who has run the historic Folly Cove Inn alone ever since her husband disappeared. As the sisters reunite, painful wounds are reopened and family secrets are revealed, testing the seemingly unbreakable bonds of sisterhood. “Readers will be able to fly through the 400 pages of witty sarcasm, tearful revelations and sisterly bonding.” – RT Book Reviews

Talk about one book that made an impact on you.
As a child, my biggest passion was horse books. If there was a horse on the cover of a book, you can bet that book was on my shelf (that’s why I’m so happy about the book cover for Folly Cove—finally! A horse on one of my book covers!) Without a doubt, the first book to make a big impact on me was The Black Stallion by Walter Farley. It had everything: a gorgeous horse, a brave teenager who has traveled the world, and even a shipwreck.

Where do you love to be?
Wherever I can write! As the mother of five children, my writing spaces have necessarily been varied and makeshift: coffee shops and libraries, cheap hotels during self-imposed writing retreats, and late nights at my kitchen table. Probably my favorite place to write is my summer house on Prince Edward Island, where my bedroom window overlooks potato fields and a sheep farm. There’s something meditative about watching clouds of white sheep drift across a green field.

The road to publication is twisty at best–tell us about some of your twists.
I’m a late bloomer. I started writing fiction in my twenties, but it took a quarter century to publish my first novel. After that, it felt like I’d stepped onto a speeding train, with the publisher giving me contracts for a new book every year. The twists along the way included having a nasty fiction editor tell me I was “too old to be called promising” when I was thirty, weeping into a glass of bourbon when my fifth novel was rejected for the twentieth time, having my father-in-law bellow down to me on the beach from his second-floor condo balcony that my agent was on the phone and it was “urgent,” discovering I could make a good living as a ghost writer for celebrities, having my beloved editor of many years fall ill and leave her job, and realizing the only thing that truly matters is the writing.

When you were a teenager, what did you think you’d be when you grew up?
A veterinarian. I grew up on a gerbil farm (it’s true!) and thought it was perfectly normal to own forty horses, a flock of chickens, a dozen geese, eight African pygmy goats, two peacocks, four dogs, seven cats, a small herd of sheep, and over 9,000 gerbils.

Share an embarrassing publishing-related story.
The week after my memoir earned a rave review in People magazine, I was convinced I’d finally made it BIG. Could a movie deal be far behind? I went to my next bookstore event prepared with twenty pens in different colors, psyched to greet my adoring fans. The only person who turned up was an ex-boyfriend who had seen the same review in People and thought he could sneak into the bookstore unnoticed, because I was so famous… 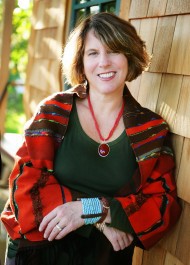 Novelist, journalist and celebrity ghost writer, Holly Robinson is the author of The Gerbil Farmer’s Daughter: A Memoir and the novels The Wishing Hill, Beach Plum Island, Haven Lake, and Chance Harbor. Holly’s articles and essays appear frequently in publications such as Cognoscenti, The Huffington Post, Parents, Redbook and dozens of other national publications. She and her husband have five children and a stubborn Pekingese.