Earth and Ink with Sonja Yoerg: Christmas Pudding to the Rescue

I can’t lie, friends. It’s been a rough two weeks. In the midst of ever more troubling news, our little town became center stage of a national screaming match about, well, everything, because that’s the way we do it these days. There have been multiple death threats and the town is split down the middle.

No wonder I’ve been escaping into my garden. While I’m weeding or hauling 70 pounds of onions inside to dry, I forget about politics and hatred and crazy people. Instead of worrying about the world, I worry about Japanese beetles and squash bugs. I listen to the bees buzzing in the cucumbers, happy in their work, and hear Buddy the indigo bunting singing from a treetop. Remember Buddy?

My other trick for not dissolving into a pool of debilitating anxiety is to play the long game. If there is a future, there is hope, right? The long game for a gardener is all about extending the growing season and preserving the bounty. I freeze most of our excess winnings from the garden, but do a little canning, too. I pickled beets the other day and was comforted by the thought of opening a jar in the depths of winter and tasting summer. (I also made rhubarb black currant jam but it’s so delicious it may not last until winter.) 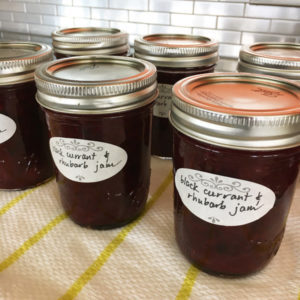 It’s hotter than a billy goat in a pepper patch here in Virginia. Nevertheless, winter is coming. I don’t mean that in the ominous Game of Thrones way, but with the summer solstice behind us, a few minutes of daylight are sliced off each passing day. Although the inexorable slide of time can be cruel, right now I find the idea of change comforting. Just think: in a few months, we’ll celebrate the turn toward longer days, and the eventual arrival of spring and renewal.

But renewal can occur at any time, especially if we insist on it. To celebrate the seasons ahead, to put my faith in traditions, in families uniting in joy, and in the power of good food, lovingly prepared, I’m making a Christmas pudding. Now. While it’s 93 degrees outside.

My husband is English and I’ve been meaning to make one for years. I just kept forgetting to do it in summer, so it has months to cure and become magically delicious. This year I remembered.

I’m using this recipe, which employs my beloved Instant Pot. The first step is soaking the dried fruit in booze. (Hey, Fruit, that’s pretty much my coping mechanism, too.) 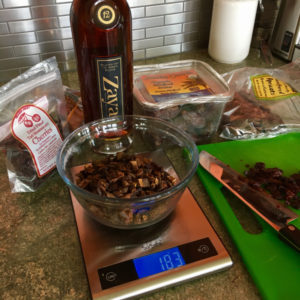 Check back with me in December, and I’ll let you know how it turns out. In the meantime, find a way to get through the heartache and anger that works for you, and share it with your friends. We need each other, now more than ever.

And we always need dessert.