Earth & Ink with Sonja Yoerg: A Mind of Winter

I suspect I’m an outlier but I’m hoping for lots of snow this winter. I’ve always been a fan of the stuff. Born in a snowbank in Vermont in the last days of December, I learned to ski at the same time I learned to walk. To this day my favorite sport is cross-country skiing. I even enjoy shoveling. Go ahead. Say it. Weirdo.

It should come as no surprise, then, that I was delighted at the early snow we had of a couple weeks ago. 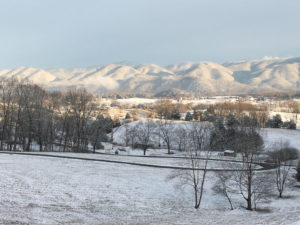 See what a little dusting of white does to the world? I adore the way the house is brighter inside because of the reflection off the snow. My beloved garden was graced with a snowy meringue. The plants growing under the row cover don’t mind the snow, either. In fact, it’s insulation! 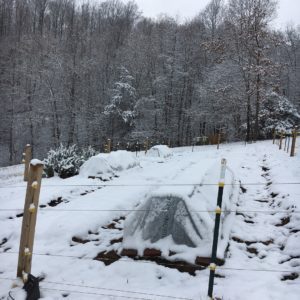 This winter I have even more reason to wish for snow; the book I’m working on is called The Snow Cave. Set in Squaw Valley, California, and Germany, the story is loosely based on my father’s life. Loosely. My father was a mountain climber, tennis pro and ski instructor, so it’s clear from where my love of mountains and snow derives. Here he is in his wintery element. 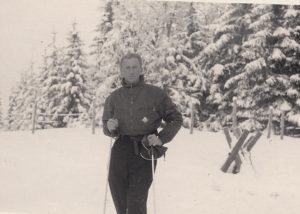 In addition to the snow cave in the title, themes connected to snow (cold and purity and fresh starts) are central to the story. That’s why I’d appreciate some snow around for atmosphere. I’m a visual person and there’s nothing like being immersed (not literally in this case—my poor laptop!) in what I’m writing about. When I was drafting Middle of Somewhere, a thunderstorm happened to come along as I was writing a pivotal storm scene. Talk about summoning the muse. If I can’t get Mother Nature to bend to my will, I resort to Google, of course. Google Images: the next best thing to being there.

If you’re a writer, do your surroundings help you write certain scenes? Do you use music as a muse? (I confess I need silence myself.)

Oh, about the title of this post. It’s the first line of Wallace Stevens’ poem, The Snow Man. You can read it here and see why I thought of it today. Our imaginations need springboards, or surfaces to grow on. Inspiration can be found anywhere but my favorite place to look is outside.

Wishing all you a happy, healthy, productive New Year!