Writers gotta write but they also do a gaboonload of reading. We read books our friends have written because we love them. We read books for blurbs because everyone needs blurbs. We read within our genre to scope out the competition and outside of our genre for fresh ideas and for fun. And we read for research.

I’m working on a story partially set during World War II: in Germany and on the Russian Front. My research reading has included novels (Those Who Save Us by Jenna Blum is my hands-down favorite), firsthand accounts by German soldiers, on-line war history forums and straight-up history books. I can’t get enough of the history. Just when it seems everything about WWII has been written, someone finds another angle. 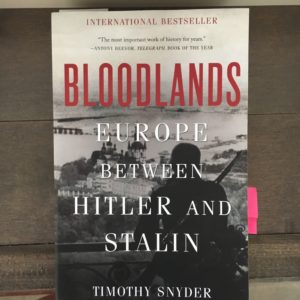 For the last few weeks, I’ve been making my way through Bloodlands: Europe between Hitler and Stalin, written by Timothy Snyder in 2010.

The book is brilliant and absolutely devastating. I have to ration how much I read at a sitting and I can’t read it at night for fear of nightmares. But I must read it.

Snyder chronicles the policies and actions of Hitler and Stalin that led to 14 million people killed between Berlin and Moscow. Part of this was, of course, the Holocaust and it is a central piece of this history. I did not know, for instance, that most Jews and other targeted groups were not taken to camps but rather killed where they lived. And before Hitler unleashed his evil, Stalin had already killed and deliberately starved millions. The scale of the brutality and the personal stories Snyder includes are harrowing. Like I said, I can only stomach small doses.

The antidote to such reading, to such truths, is found outside. For me, a ten-minute walk in the woods reminds me of the world beyond the influence of men and war (at least for now). I find it hard to express without sounding vapid or melodramatic but nature, and particularly woods, calm me so profoundly and rapidly I suspect magic. 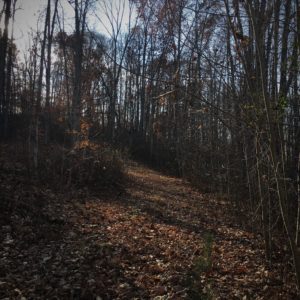 These are my woods. It’s officially stick season.

I hope you have something akin to these, a place of respite. I hope you seek it out when, as Wordsworth said, “the world is too much with us.”

As for Bloodlands, I cannot recommend it more highly: it is brave and scholarly and eloquent. If you do pick it up, remember to also put it down. Go outside. Find sun and earth and air. Stand amid fallen leaves and the stillness of bare trees. Embrace stick season.