Just in time for the weekend, our very own Sandra Block has a book recommendation for your #PreFridayReads pleasure!!! 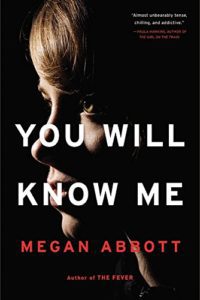 You Will Know Me, Megan Abbot.

Suspense lovers: don’t miss the one! Meg Abbot has a knack for creating an eerie atmosphere out of everyday suburbia. Who would imagine murderous impulses in a girl’s gymnastics studio? Why, Meg Abbot of course. The story revolves around a girl with the world of her family’s expectations on her gym-muscled shoulders. She is a gymnastics phenom, clawing her way to the Olympics.

But this satin-shiny, seemingly glamorous world is not always easy. The desire to win is all-encompassing. There is the over-involved father, the forgotten sibling, the second -mortgaged house, the jealous team-mates and the non-so-innocent crushes. When tragedy strikes, who is to blame, and who must be protected at all costs? The young woman in the center of this universe remains unknowable, perhaps as all teenagers ultimately are to their parents. Add Abbot’s killer descriptions and vibrant writing, and you have a winner!

How far will you go to achieve a dream? That’s the question a celebrated coach poses to Katie and Eric Knox after he sees their daughter Devon, a gymnastics prodigy and Olympic hopeful, compete. For the Knoxes there are no limits–until a violent death rocks their close-knit gymnastics community and everything they have worked so hard for is suddenly at risk.

As rumors swirl among the other parents, Katie tries frantically to hold her family together while also finding herself irresistibly drawn to the crime itself. What she uncovers–about her daughter’s fears, her own marriage, and herself–forces Katie to consider whether there’s any price she isn’t willing to pay to achieve Devon’s dream.

From a writer with “exceptional gifts for making nerves jangle and skin crawl” (Janet Maslin), You Will Know Me is a breathless rollercoaster of a novel about the desperate limits of parental sacrifice, furtive desire, and the staggering force of ambition.

You can learn more about Megan at http://meganabbott.com

A. Block graduated from college at Harvard, then returned to her native land of Buffalo, New York for medical training and never left. She is a practicing neurologist and proud Sabres fan, and lives at home with her husband, two children, and impetuous yellow lab Delilah. She has been published in both medical and poetry journals. “The Girl Without a Name” is her second Zoe Goldman novel. Her debut was “Little Black Lies.”