Picture it: palm trees, Mediterranean blue, and a bowl of delectable bouillabaisse served with a chilled glass of rosé. There’s something undeniably glamorous about the south of France, n’est-ce pas? Now take that image and add in a famed film festival, complete with celebs, champagne, and splashy dresses on the red carpet– and let’s not forget the yacht parties. Who wouldn’t love to be a fly on the wall at the annual Cannes Film Festival? I know I would, but I settled for the next best thing—researching and writing about it.

The prestigious Cannes Film Festival is held annually at the Palais des Festivals et des Congrès on the southern French waterfront. Committees preview new films of all genres, including documentaries from around the world. These films compete for esteemed prizes, including the grand prize, La Palme d’Or, but that’s not all. With so much “royalty” in town, the festival attracts tourism and press attention, as well as showbiz scandals. There are insanely expensive parties and more money than one can even imagine.

For my novel-in-progress releasing in July 2019 called Meet Me in Monaco, I’ve taken great pleasure in digging into the origins of this festival and how it evolved into the high profile event it is today. It really got its wings in the mid 1950s, which is when my new book opens. The novel features a perfumer and British press photographer whose lives irrevocably change the day they meet the elegant superstar, Grace Kelly, who is in town for the Cannes Film Festival of 1955. Grace, along with Bing Crosby and writer/director George Seaton, were nominated for their film called The Country Girl. Though it didn’t win a prize in Cannes, Grace secured an Oscar for Best Actress. In my book, she also scores new friends, including a certain prince. *wink* 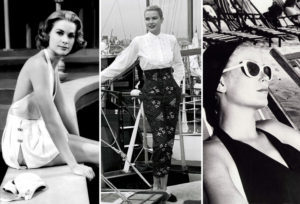 In researching the festival, Hazel and I (my co-writing partner), have run across all sorts of fascinating details. What did the cameras look like in the 1950s and how did they work? Were there as many tabloid photos about the starlets as there are today? (We couldn’t believe how many there were even 60 years ago!) What sorts of dishes were served during the event-sponsored meals? (See Grace here, being served by a waiter at the festival.) We’ve also fallen into the odiferous and elegant world of perfume-making in our research for which the south of France is famous, as well as the then-faded glamour of Monaco, but that’s a post for another day… 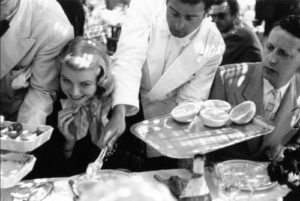 Just a year before in 1954, Grace had paraded through Cannes for both the festival and also to film her famed movie directed by Alfred Hitchcock, To Catch a Thief. Check out this site for a photo gallery of the locations where the film was shot.

These are the joys of writing historical fiction: spending time in the mind and heart of extraordinary people from the past; uncovering forgotten lifestyle habits; learning how new inventions came about; being swept away into another time and place, away from the hustle and hardships of everyday life. And who knows, perhaps one day, I’ll be lucky enough to find myself on the fringes of the Cannes film festival, or even amidst the melee! For now, I will settle for planning a research trip to the lovely area. Stay tuned… 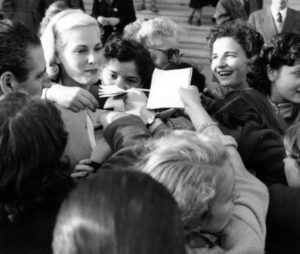 I leave you with links to photos from the 2018 Cannes Film Festival that has just wrapped. Which gown is your favorite? Which gentleman-in-tux is the most handsome? 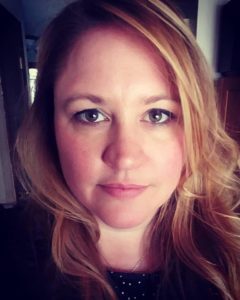 Heather Webb is the international bestselling author of historical novels Becoming Josephine, Rodin’s Lover, Last Christmas in Paris, and The Phantom’s Apprentice, which have been featured in the New York Times, Wall Street Journal, Entertainment Weekly and more, as well as received national starred reviews. In 2015, Rodin’s Lover was selected as a Goodreads Top Pick, and in 2017, Last Christmas in Paris became a Globe and Mail bestseller and was also shortlisted for the Women’s Fiction Writers Association Star Award. To date, Heather’s novels have sold in multiple countries worldwide. She is also a professional freelance editor, and teaches craft courses at a local college. When not writing, you may find her collecting cookbooks or looking for excuses to travel. She lives in New England with her family and one feisty rabbit.