HistFic Secrets: What a Ghost Wants

As a historical fiction novelist, I’m always on the prowl for a historical backdrop that still has something to tell us and hasn’t had much light thrown on it in recent years. Not long ago, when I was looking for a place in which to set a new book, I remembered that the RMS Queen Mary, now a floating hotel moored forever in Long Beach harbor, is located just two hours from my home in Southern California. I decided I should pay her a visit to see if there were any old stories aboard just waiting to be uncovered. 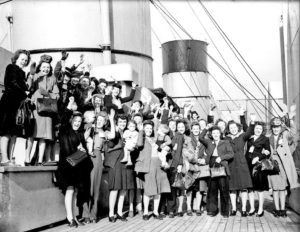 On the tours (I took three) I found out this stately ship is pretty much the last of her kind. The Titanicis long gone, so is the Lusitania, and the Mauritania. The Queen’s sister ship, The Queen Elizabeth, is half-sunk in a Hong Kong bay. The Queen Maryis the only surviving big cruise ship from that pre-WW2 era. She was a British-made Cunard luxury liner, built in the 1930s, and famously carried celebrities and kings and queens across the Atlantic. During WW2 she was painted gray, dubbed the Gray Ghost and spent the wars of the war as a troop carrier ever on Hitler’s list of targets. His U-boats never found her. In 1946, she transported thousands of war brides who’d married American servicemen during the war, on multiple crossings to New York from Southampton. Then in the late 1960s, when jet airplanes made transatlantic travel possible in hours instead of days, and she was bleeding money, the Queenwas sold to the city of Long Beach, where she was stripped of her engines and made a floating hotel. 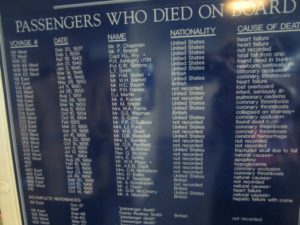 I knew the moment I read of this ship’s storied past, especially the part about the war brides, that I’d made a fabulous find for a novel backdrop. I’d found a story start – war brides! And then I found out – on one of those tours – that the ship is apparently haunted. Superbly so. She is in fact, one of the most haunted locations in the U.S., if you read what paranormal experts have to say. When I came across that bit of historical data, I knew that was a part of her story that I just couldn’t pretend didn’t exist.

According to who you talk to, there are arguably upwards of one hundred ghosts on the Queen Mary. And the most interesting thing to me is that if you look at the placard below decks in the sick bay, you will see the record of all the people who died aboard the ship during the years she sailed. There are less than fifty names, and yet there are supposedly one hundred ghosts or more aboard. Which means, if ghosts exist – and hooray that I write and not nonfiction – half or more of the ghosts who hover on deck came there. You’ve got to wonder why. If ghosts doexist, and they inhabit theQueen Mary, why did they come there? What do they want? Those are story questions that found myself itching to ponder.

I’ll tell you right now, yes, there are ghosts the resulting book I wrote, A BRIDGE ACROSS THE OCEAN. But they aren’t scary. They aren’t out to harm or frighten. My ghosts are literary, if you will. Think The Ghost and Mrs. Muirfor a retro reference! I figured if I’m going to put a ghost in a story, he or she is going to have to want something they don’t have, just like the mortal characters. With that in mind, I on the reason why so many ghosts – assuming they exist – would gather on this ship. What could they possibly want? I imagined a reason. And surprise of surprises, it fit nicely with the idea I had about the war brides. 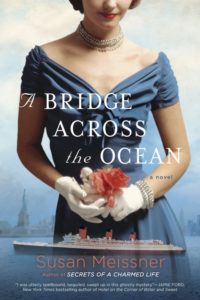 Did the research convince me ghosts are real? Well, when I interviewed the commodore of the Queen Mary, a wonderfully kind man, I asked him what he thought of all the reports of ghost sightings, as well as the ghost tours that the ship offers. He shrugged and said, “Well…” – and I thought he was going to say, “Well, it sells tickets, and that extra income keeps this old ship in good repair” – but that’s not what he said. He replied, “Well, things have happened on the ship that no one can explain. They’ve even happened to me.”

To me, that means we don’t know everything about everything, and I’m thankful I’m a novelist, not a scientist. I get to ask, “What if?” as much as I want. And I do.

(If you’re interested in knowing more about the Queen Mary’s population of dearly departed here’s an article with loads of pictures: https://www.crixeo.com/haunted-queen-mary-ship/) 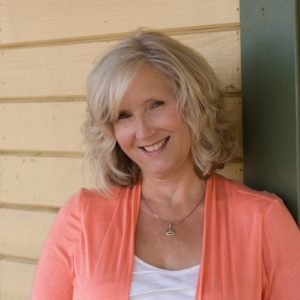 I cannot remember a time when I wasn’t driven to write. I attribute this passion to a creative God and to parents who love books and more particularly to a dad who majored in English and passed on a passion for writing.

I was born in 1961 in San Diego, California, and am the second of three daughters. I spent my very average childhood in just two houses. I attended Point Loma College in San Diego, majoring in education, but I would have been smarter to major in English with a concentration in writing. The advice I give now to anyone wondering what to major in is follow your heart and choose a vocation you are already in love with.

I’m happy and humbled to say that I’ve had 17 books published in the last dozen years, including The Shape of Mercy, which was named one of the 100 Best Books in 2008 by Publishers Weekly, and the ECPA’s Fiction Book of the Year, a Carol Award winner, and a RITA finalist. I teach at writers’ conferences from time to time and I’ve a background in community journalism.

I’m also a pastor’s wife and a mother of four young adults. When I’m not at work on a new novel, I write small group curriculum for my San Diego church. Visit me at my website: http//:susanmeissner.com on Twitter at @SusanMeissner or at www.facebook.com/susan.meissner