HistFic Secrets: When a Character Isn’t Human, The Polikarpov

Welcome to the inaugural post of From the Archives! This is a new weekly column from the Tall Poppies, featuring a behind-the-scenes look at Historical Fiction (and other genres that pull in historical threads). We’ll take a glimpse at the fascinating research gems that inspire us, look into the minds of great historical figures, and even travel to some of the places that helped bring our books to life. We look forward to sharing our stories with you!

When a Character isn’t Human, The Polikarpov Po-2

When I decided to write a novel about Russia’s infamous Night Witches, the fierce women who flew combat missions for the Soviet Union in the Second World War, it was clear very early on in my research that one of the most important characters in my book—almost on par with Katya, Vanya, Oksana, Taisiya, and the rest of the crew—was going to be the aircraft themselves. It became my job to know that plane as intimately as I knew the rest of my cast.

The women of the 46thTaman Guards flew in rickety biplanes called the Polikarpov U-2, later renamed Po-2 in 1944 in honor of the plane’s designer,Nikolay Polikarpov, on the occasion of his death. The planes were made of wood and canvas with a few struts made of aluminum for support. If you think that doesn’t sound particularly safe. You’re right. If you think it sounds ridiculously flammable, you’re right again. The engine was about as sophisticated as a modern lawn mower, and twice as loud. They were designed primarily as training aircraft and crop dusters. 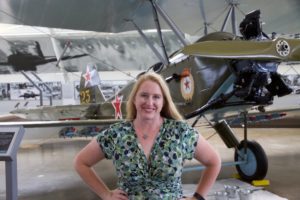 Aimie with the Polikarpov Po-2 at the Flying Heritage Collection

So why on earth did the Soviet Air Force use such a basic aircraft in combat? The planes were slow, but maneuverable, and could fly well below the stalling range of the more advanced German aircraft, which gave them a definite advantage in a dogfight. There was also the reality that the German forces had done incredible damage to the Soviet fleet on their initial invasion of the USSR because Stalin was in such shock over Hitler’s betrayal, that he refused to act for almost ten days. The aircraft were easy to fly, quick to repair, and could take a serious beating. And make no mistake, they did.

In order to ‘make friends’ with the Polikarpov, I did two things (apart from a lot of reading). First, I visited one of the only functional Polikarpov Po-2s in North America, which happens to be located outside Seattle at the Flying Heritage Collection (fun fact—I got the call about the book deal for Daughters of the Night Skyin the parking lot outside the museum). I photographed the plane from every angle, asked the docents a zillion questions, got access to the documentation they had on her (all in Polish, unfortunately), and stared at her for a long, long while. It was also useful to see her alongside the German aircraft she would have been flying against. She was much, much smaller.

The second step was actually having the opportunity to fly in an open cockpit aircraft. There is no substitute for firsthand experience (something you’ll hear me say a lot over the course of this column) and it was something I had to do to make my book more realistic. Unfortunately, the Polikarpov in Seattle wasn’t flying while I was there, and the museum rarely allows guests on their aircraft for many reasons. 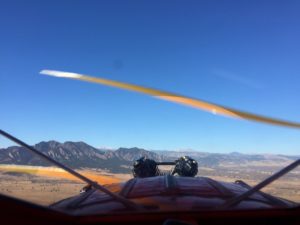 So, I tracked down a local pilot with a WWII era aircraft who makes his living giving people joyrides. I was able to go up in a Waco UPF-7. The pilot explained that this was an executive class plane. That meant there was a small compartment built into the lower fuselage just large enough for the pilot to stow a garment bag with a suit, so he could dash off to a meeting after landing at the local airport. I guess jet-setting was even a thing in the late 30s.

I explained to the pilot what I wanted, and he was able to simulate a bombing run fairly well. No stalling out the engine to surprise the sleeping Nazis, but, you know, insurance. I’m not sure I’ll have a more exhilarating research experience in my life, but I can certainly tell my readers, that not all research happens in the library! 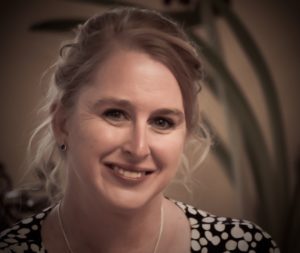 Aimie K. Runyan writes to celebrate history’s unsung heroines. She has written three historical novels, including the internationally bestselling Daughters of the Night Sky and Promised to the Crown. She is active as an educator and speaker in the writing community and beyond. She lives in Colorado with her wonderful husband and two (usually) adorable children. To learn more about Aimie, please visit www.aimiekrunyan.com.