Get Cozy With Some Fall Family Drama 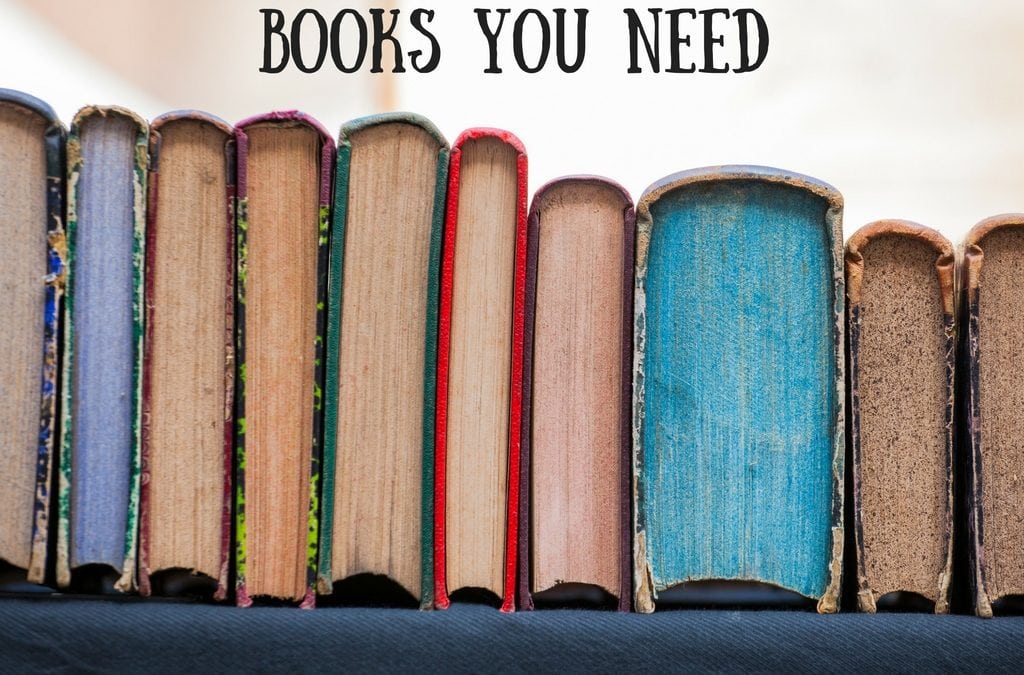 Ah, fall. Fires. Big, cozy sweaters. Pumpkin spice everything. The pending holiday season. Who doesn’t have some dysfunction around the Thanksgiving Table? Curl up this fall with some delicious family drama in these nine new or new(ish) novels you won’t want to miss! 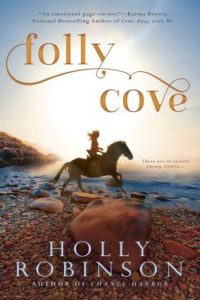 An emotional and rich new novel about family and secrets from the acclaimed author of CHANCE HARBOR.

The Bradford sisters are famous in Rockport, Massachusetts: for their beauty, their singing voices, their legendary ancestors, and their elegant mother, Sarah, who has run the historic Folly Cove Inn alone ever since her husband disappeared.

As the three sisters plan a grand celebration for their mother’s birthday, they struggle to maintain the illusions about their lives that they’ve so carefully crafted. But when painful old wounds reopen and startling family secrets are revealed, they soon discover that even the seemingly unbreakable bonds of sisterhood can be tested…
BUY 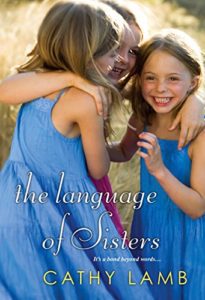 From acclaimed author Cathy Lamb comes a warm and thoughtful novel about the secrets that can break or unite a family—and the voices that resonate throughout our lives…
Toni Kozlovsky can’t explain how she knows exactly what her sisters are feeling—only that the connection seems to happen out of the blue, just when they need it most. Since Toni, Valerie, and Ellie were little girls growing up in Communist Russia, their parents have insisted it’s simply further proof that the Kozlovskys are special and different.

As poignant as it is humorous, The Language of Sisters explores the echoes of the past that can cling to the present—and how love, laughter, and family can rescue us time and again.
BUY 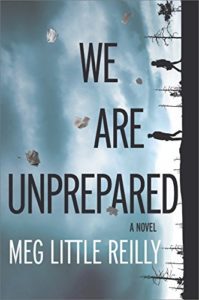 Meg Little Reilly places a young couple in harm’s way—both literally and emotionally—as they face a cataclysmic storm that threatens to decimate their Vermont town, and the Eastern Seaboard in her penetrating debut novel, WE ARE UNPREPARED.

Ash and Pia move from hipster Brooklyn to rustic Vermont in search of a more authentic life. But just months after settling in, the forecast of a superstorm disrupts their dream. Fear of an impending disaster splits their tight-knit community and exposes the cracks in their marriage. Where Isole was once a place of old farm families, rednecks and transplants, it now divides into paranoid preppers, religious fanatics and government tools, each at odds about what course to take.

WE ARE UNPREPARED is an emotional journey, a terrifying glimpse into the human costs of our changing earth and, ultimately, a cautionary tale of survival and the human.
BUY 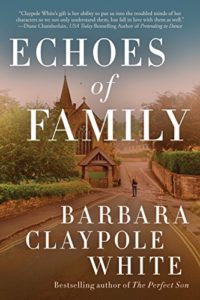 Sometimes the only way through darkness is to return to where it began.

Marianne Stokes fled England at seventeen, spiraling into the manic depression that would become her shadow. She left behind secrets, memories, and tragedy: one teen dead, and her first love, Gabriel, badly injured. Three decades later she’s finally found peace in the North Carolina recording studio she runs with her husband, Darius, and her almost-daughter, Jade…until another fatality propels her back across the ocean to confront the long-buried past.

In her picturesque childhood village, the first person she meets is the last person she wants to see again: Gabriel. Now the village vicar, he takes her in without question, and ripples of what ifreverberate through both their hearts. As Marianne’s mind unravels, Jade and Darius track her down. Tempers clash when everyone tries to help, but only by finding the courage to face her illness can Marianne heal herself and her offbeat family.
BUY 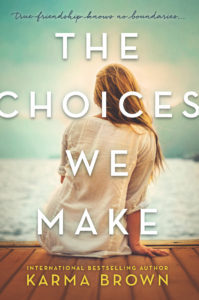 Following her bestselling debut novel Come Away with Me, Karma Brown returns with an unforgettable story that explores the intricate dynamics of friendship and parenthood

Hannah and Kate became friends in the fifth grade, when Hannah hit a boy for looking up Kate’s skirt with a mirror. While they’ve been close as sisters ever since, Hannah can’t help but feel envious of the little family Kate and her husband, David, have created—complete with two perfect little girls.

She and Ben have been trying for years to have a baby, so when they receive the news that she will likely never get pregnant, Hannah’s heartbreak is overwhelming. But just as they begin to tentatively explore the other options, it’s Kate’s turn to do the rescuing. Not only does she offer to be Hannah’s surrogate, but Kate is willing to use her own eggs to do so.

Full of renewed hope, excitement and gratitude, these two families embark on an incredible journey toward parenthood…until a devastating tragedy puts everything these women have worked toward at risk of falling apart. Poignant and refreshingly honest, The Choices We Make is a powerful tale of an incredible friendship and the risks we take to make our dreams come true.
BUY 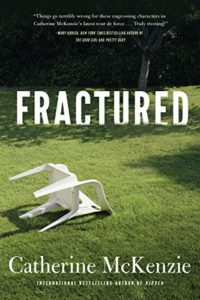 Julie Prentice and her family move across the country to the idyllic Mount Adams district of Cincinnati, hoping to evade the stalker who’s been terrorizing them ever since the publication of her bestselling novel, The Murder Game. Since Julie doesn’t know anyone in her new town, when she meets her neighbor John Dunbar, their instant connection brings measured hope for a new beginning. But she never imagines that a simple, benign conversation with him could set her life spinning so far off course.

We know where you live…

After a series of misunderstandings, Julie and her family become the target of increasingly unsettling harassment. Has Julie’s stalker found her, or are her neighbors out to get her, too? As tension in the neighborhood rises, new friends turn into enemies, and the results are deadly.
BUY

Today Will Be Different by Maria Semple (October 4, 2015; Little, Brown and Co) 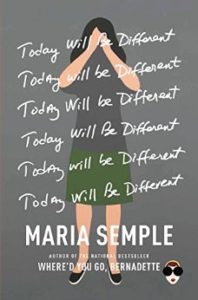 A brilliant novel from the author of  Where’d You Go, Bernadette, about a day in the life of Eleanor Flood, forced to abandon her small ambitions and awake to a strange, new future.

Eleanor knows she’s a mess. But today, she will tackle the little things. She will shower and get dressed. She will have her poetry and yoga lessons after dropping off her son, Timby. She won’t swear. She will initiate sex with her husband, Joe. But before she can put her modest plan into action-life happens. Today, it turns out, is the day Timby has decided to fake sick to weasel his way into his mother’s company. It’s also the day Joe has chosen to tell his office-but not Eleanor-that he’s on vacation. Just when it seems like things can’t go more awry, an encounter with a former colleague produces a graphic memoir whose dramatic tale threatens to reveal a buried family secret.

TODAY WILL BE DIFFERENT is a hilarious, heart-filled story about reinvention, sisterhood, and how sometimes it takes facing up to our former selves to truly begin living.
BUY 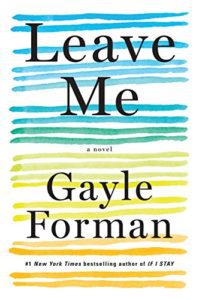 Every woman who has ever fantasized about driving past her exit on the highway instead of going home to make dinner, and every woman who has ever dreamed of boarding a train to a place where no one needs constant attention–meet Maribeth Klein. A harried working mother who’s so busy taking care of her husband and twins, she doesn’t even realize she’s had a heart attack.

With bighearted characters–husbands, wives, friends, and lovers–who stumble and trip, grow and forgive, Leave Me is about facing the fears we’re all running from. Gayle Forman is a dazzling observer of human nature. She has written an irresistible novel that confronts the ambivalence of modern motherhood head on and asks, what happens when a grown woman runs away from home?
BUY 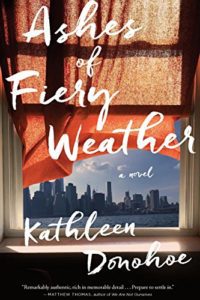 A debut novel about the passionate loves and tragic losses of six generations of women in a family of firefighters, spanning from famine-era Ireland to Brooklyn a decade after 9/11

“There isn’t anything in the world that hurts like a burn.” No one knows the pain of a fire more than the women of the Keegan/O’Reilly clan. Kathleen Donohoe’s stunning debut novel brings to life seven unsentimental, wry, and evocative portraits of women from a family of firefighters.

Poignant, wise, and immersive, Ashes of Fiery Weather is a tour de force in the tradition of Let the Great World Spin, one that explores the emotional wounds and ultimate resilience of those drawn to fire, as well as the many ways we search for each other, and the many ways we hope to be rescued.
BUY

What are the fall reads you’re most excited about?