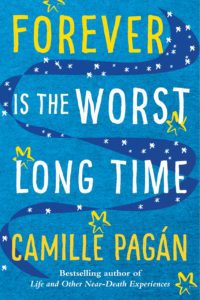 Today we’re celebrating the release of Camille Pagán’s Forever is the Worst Long Time. RT Book Reviews named Forever is the Worst Long Time a top pick and called it “A beautifully poetic reminder that life and love are often nothing like we expect but also exactly what we need.” Forever was also voted also an Amazon best book of the month, and named one of InStyle’s “Seven Best Books to read in February.” Here’s the summary:

When struggling novelist James Hernandez meets poet Louisa “Lou” Bell, he’s sure he’s just found the love of his life. There’s just one problem: she’s engaged to his oldest friend, Rob. So James toasts their union and swallows his desire.

As the years pass, James’s dreams always seem just out of reach—he can’t finish that novel, can’t mend his relationship with his father, can’t fully commit to a romantic relationship. He just can’t move on. But after betrayal fractures Lou’s once-solid marriage, she turns to James for comfort.

When Lou and James act on their long-standing mutual attraction, the consequences are more heartbreaking—and miraculous—than either of them could have ever anticipated. Then life throws James one more curveball, and he, Rob, and Lou are forced to come to terms with the unexpected ways in which love and loss are intertwined.

Now Camille answers some fun Poppy questions to help you get to know her!

1. The road to publication is twisty at best–tell us about some of your twists.
I always wanted to write novels, but it wasn’t until I was in late twenties that I was ready to try. My first published novel, The Art of Forgetting, was also the first draft I ever attempted to write; my agent sold it at auction to Dutton and Plume, which are imprints of Penguin, and to half a dozen foreign publishers, too.
That sounds like an overnight success story … except the book didn’t sell particularly well in the U.S. Over the next few years, I wrote several books I didn’t really like (more on that shortly) and didn’t attempt to sell, and tried to ignore the lingering suspicion that my career was over.
In 2013, I was on assignment in Santa Monica and had a few hours to kill before I flew back to Ann Arbor. I was on the beach when the idea for my second novel, Life and Other Near-Death Experiences, came to me almost at once. (The book is about a woman whose life falls apart in a single day, and who reacts by running away to a small Puerto Rican island called Vieques.) I wrote it over the course of six months, then took another six to revise it. My agent sold Life to Amazon’s Lake Union Imprint. The month it came out, it spent three weeks as the #1 bestselling (all-category) book on Amazon; I recently sold film rights to Jessica Chastain’s Freckle Films.
My next two novels, including Forever is the Worst Long Time, will be published by Lake Union, which has done an incredible job helping my work find an audience. But my early publishing experience is a constant reminder that publishing is nothing if not a roller coaster ride.
2. When you were a teenager, what did you think you’d be when you grew up?
Well, I wanted to be a novelist—but I planned to be doctor. I was the first in my family to attend college, and I received a full ride to the University of Michigan, which upped the pressure to do something “useful.” I liked science (and still do, clearly; as a journalist, I specialize in health). But in college, I quickly realized I’d rather write about medicine than practice it.
Though I took creative writing classes during college and read everything I could get my hands on, I didn’t begin writing fiction in earnest until my late twenties, shortly after I had my daughter. Looking back, I needed life experience in order to have something to write about.
3. Talk about your book’s title.
I had originally called my latest novel How It Ends, which was fine but didn’t quite capture the tone of the book. I came up with the titles for my first two novels, The Art of Forgetting and Life and Other Near-Death Experiences early in the drafting process, so with this third book, it was strange for me to write an entire manuscript without having “the” title in mind.
While I was drafting, one line I had written—“As far as I’m concerned, forever is the worst long time”—kept rattling around in my head. I told my developmental editor that the second half of that sentence might make a good title, and she shared it with my primary editor at Lake Union, who shared it with her publishing team … and the rest is history. The title is perfect for the tone of the book: Sad but slightly irreverent.
4. Have you ever tried writing in a different genre? How did that turn out?
Oh yes. After The Art of Forgetting, I wrote a historical novel, a romance novel, and a very literary novel. I didn’t publish them—they were awful—but I’m glad I wrote them. Those terrible, unpublished drafts helped me find my voice and figure out what I did want to write. I’m still learning, of course, and if all goes well, will continue to learn as long as I’m still writing.
5. What’s your next big thing?
I’m just wrapping up a draft of a novel called Woman Last Seen During Her Thirties. It’s a funny take on tragedy, much like my second novel, Life and Other Near-Death Experiences.And like all of my work, it centers around love, loss, and living without regret. It will be published in February 2018. 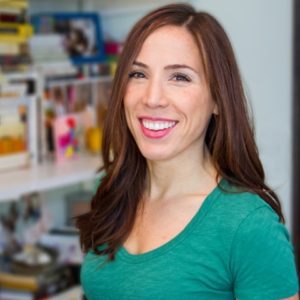 Camille Pagán is the author of FOREVER IS THE WORST LONG TIME, THE ART OF FORGETTING, and the #1 Kindle bestselling novel LIFE AND OTHER NEAR-DEATH EXPERIENCES, which was recently optioned for film. An award-winning journalist and former editor for Real Simple, Fitness, and other publications, her work has appeared in Fast Company, Forbes, Men’s Health, O: The Oprah Magazine, Parade, and many others. Pagán lives in Ann Arbor with her family. Visit her at www.camillepagan.com.
Website | Facebook | Twitter | Instagram