Happy Launch Day to Marin Thomas and THE FUTURE SHE LEFT BEHIND!

Marin Thomas’ The Future She Left Behind launches today! We are lucky enough to snag her in the midst of her release schedule to sit down for an interview! Read on to find more about this fascinating Pop 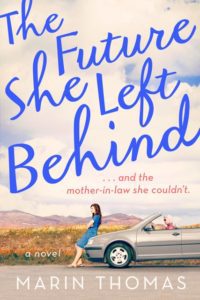 TPB: Talk about one book that made an impact on you.

MT: The Rules of Life by Richard Templar. I read this book once a year as a refresher coarse on personal choice—how we choose to live our lives, conduct ourselves and what kind of impact we have on those around us. It’s also nice to be reminded that we’re human and imperfect but as long as we try to do our best and be a decent person we can feel good about ourselves and know we’re on the right path.

TPB: Which talent do you wish you had?

MT: I’m in awe of people with beautiful singing voices. My voice will make your ears wince like nails on a chalkboard, but that doesn’t stop me from singing. My favorite place to sing is in the shower along with the radio. Music makes life beautiful and bearable. It teaches, it relaxes and it empowers. A beautiful singing voice is a gift to the world.

TPB: What time of day do you love best?

MT: I’m a morning person—early to rise and early to bed. I inherited the “farming gene” from my paternal grandmother who came from a long line of farmers. I live in Phoenix, where we have an abundance of sunshine all year around and sizzling hot summers. Once fall arrives and the a.m. temperatures drop below 85, I drink my morning tea on the patio with the hummingbirds and watch the sun come up. There’s just something calming and peaceful about beginning the day outside with nature.

TPB: Share one quirk you have that most people don’t know about.

MT: I seriously have no sense of direction. None. I can’t tell north from south or east from west. When we lived in Colorado, the mountains were always west and I was able to figure out where I was most of the time. As soon as we moved to another state, I became hopelessly lost again. Before GPS I would take practice drives to make sure I could find my way to new places. GPS is helpful but you have to be able to see the screen, and I haven’t reached a point yet where I can wear my dollar-store readers while I’m driving.

TPB: Talk about a fun/interesting reader interaction you’ve had?

MT: Years ago an elderly male reader in Canada contacted me to say how much he enjoyed reading my contemporary Harlequin westerns. He was a grandfather in his seventies, who had raised six kids of his own and had thirteen grandchildren. He told me that he loved my stories because they always left him smiling and feeling hopeful. We became email pen pals and I loved hearing about his grandchildren’s antics and how his wife put up with his reading binges. He passed away several years ago, but I think of him often and I like to imagine that wherever he landed in the afterlife, he’s reading his romances and enjoying his happy-ever-after stories.

TPB: Talk about your book’s cover and/or title.

MT: I’m so thrilled with the cover for The Future She Left Behind. I wanted the cover to convey to readers that this was a fun, lighthearted story and the art department nailed it. I came up with the title but editorial took it a step further to promote the book’s humorous tone by adding the tag line …and the mother-in-law she couldn’t.

TPB: What are you reading right now?

One woman’s journey home gets derailed by her soon-to-be ex-mother-in-law in a novel filled with humor, small-town charm, rekindled love, and the resilient ties of family.

Cast aside by her cheating husband, Katelyn Chandler is ready to pack it all in and drive home to Little Springs, Texas. She wants a chance to regroup, reconnect with her mother, and get back to her art. 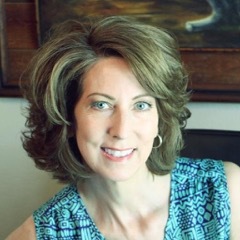 Marin Thomas writes Women’s Fiction for Berkley and western romances for Harlequin and Tule Publishing. To date she has contracted over 35 projects for Harlequin. Her first women’s fiction novel, The Promise of Forgiveness, released March 2016 and her second novel, The Future She Left Behind releases September 2017. Marin is also a member of the Tall Poppy Writers https://tallpoppies.org

Marin grew up in Janesville, Wisconsin and attended college at the University of Arizona where she played basketball for the Lady Wildcats and earned a B.A. in Radio-TV. Following graduation she married her college sweetheart in a five-minute ceremony at the historical Little Chapel of the West in Las Vegas, Nevada. Marin and her husband currently live in Phoenix, Arizona, where she spends her free time junk hunting and researching her next ghost tour.