Today we’re celebrating three Tall Poppy books releasing into the world. We announced Ella Olsen’s launch for WHERE THE SWEET BIRD SINGS last week and Kelly Simmons’ launch for THE FIFTH OF JULY just a little while ago. Now it’s time to celebrate Cathy Lamb’s NO PLACE I’D RATHER BE. 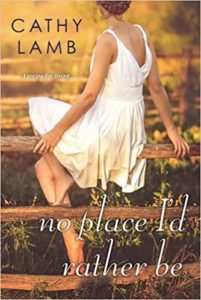 Two years ago, Olivia Martindale left behind her Montana hometown and her husband, Jace, certain it was the best decision for both of them. Back temporarily to protect her almost-adopted daughters from their biological mother, she discovers an old, handwritten cookbook in the attic. Its pages are stained and torn, their edges scorched by flame. Some have been smeared by water . . . or tears. The recipes are written in different hands and in different languages. In between the pages are intriguing mementos, including a feather, a pressed rose, a charm, and unfamiliar photographs.Hoping the recipes will offer a window into her grandmother’s closely guarded past, Olivia decides to make each dish, along with their favorite family cake recipes, and records her attempts. The result, like much of her life to date, involves a parade of near-disasters and chaotic appearances by her doctor mother, her blunt grandma, her short-tempered sister, and Olivia’s two hilarious daughters. The project is messy, real and an unintended hit with viewers.Even more surprising is the family history Olivia is uncovering, and her own reemerging ties to Montana, and to Jace. Generations of women have shared these recipes, offering strength and nourishment to each other and their loved ones. Now it’s Olivia s turn to find healing and determine where her home and her heart truly belong. 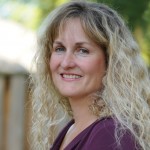 Cathy Lamb lives in Oregon where she drinks too much coffee and eats too much chocolate. She is working on her twelfth novel. You can find Cathy online at: Facebook | Website | Twitter.