Happy Pub Day to Heather Webb and The Phantom’s Apprentice 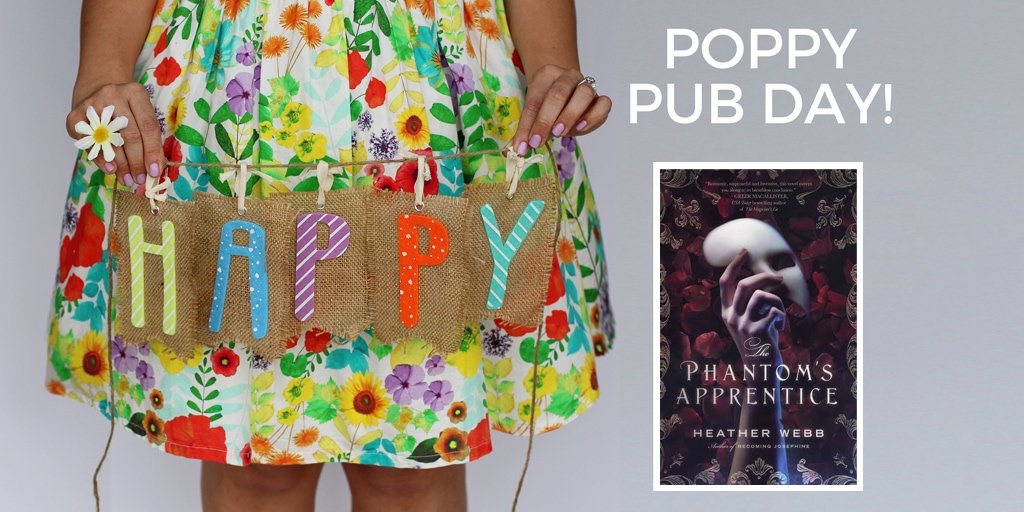 About The Phantom’s Apprentice 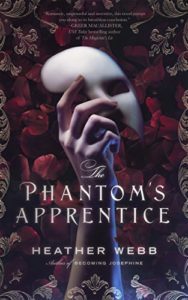 Christine Daaé sings with her violinist father in salons all over Paris, but she longs to practice her favorite pastime—illusions. When her beloved Papa dies during a conjurer’s show, she abandons her magic and surrenders to grief and guilt. Life as a female illusionist seems too dangerous, and she must honor her father’s memory.

Concerned for her welfare, family friend Professor Delacroix secures an audition for her at the Opéra de Paris—the most illustrious stage in Europe. Yet Christine soon discovers the darker side of Paris opera. Rumors of murder float through the halls, and she is quickly trapped between a scheming diva and a mysterious phantom. The Angel of Music.

As Christine’s fears mount, she returns to her magical arts with the encouragement of her childhood friend, Raoul. Newfound hope and romance abounds…until one fateful night at the masquerade ball. Those she cares for—Delacroix, the Angel, and even Raoul—aren’t as they seem. Now she must decide whom she trusts and which is her rightful path: singer or illusionist.

What Heather had to say about writing The Phantom’s Apprentice
My new book is a re-imagining of The Phantom of the Opera from Christine Daaé’s point of view, featuring illusionists, spiritualism, mystery, and all of the Gothic, glittering darkness of the original. It’s inspired by Gaston Leroux and Andrew Lloyd Webber, of course, but it’s also inspired by a book I love dearly—The Night Circus by Erin Morgenstern. I wanted to transport readers to this lush and atmospheric world set in one of my favorite eras: Belle Époque France, complete with hackney cabs, gilded mirrors, crushed velvet, ghosts, and masquerade balls. Plus a dash of romance and self-discovery never hurt anything.

In writing The Phantom’s Apprentice, I have to admit, I felt quite a bit of trepidation. The original novel by Gaston Leroux is one of the most widely read in history, and Andrew Lloyd Webber’s stage version has amassed over one billion views. (In fact, it’s the longest running show on Broadway, and just hit its thirtieth year last week.) The Gothic setting of the story, the unrequited love, the tormented characters, have engendered serious “phans”, and many of them are quite vocal about their opinions. Could I take on a project like this, reshape such a famous character and make her my own without burning down the opera?

Every step of the way I questioned myself. But the Muse insisted, so I gave Christine Daaé a voice, a more modern sense of agency, and, therefore, more relevance to today’s reader. Balancing canon of not one version, but two—the novel and play, which differ—as well as my own ideas, proved to be no easy feat. How much of the original do you incorporate? How do you balance your own creation with another that is so well loved? You could call this a major pitfall. You could also call it a wonderful challenge. It was one I knew I had to take.

What people are saying
“Romantic, suspenseful and inventive, this novel sweeps you along to its breathless conclusion.” —Greer Macallister, USA Today bestselling author of The Magician’s Lie

“Full of magic and atmosphere, lush historical detail and page-turning suspense, The Phantom’s Apprentice is sure to enthrall, enchant and delight… Brava!” —Hazel Gaynor, NYT bestselling author of The Cottingley Secret

“A performance worthy of the Paris Opera…Christine’s evolution from ‘damsel in distress’ to self-reliant woman is masterfully done, hooking the reader from the first page. Webb’s work is immersive, well-crafted, and beautifully paced. A must-read!” —Aimie K. Runyan, author of Daughters of the Night Sky 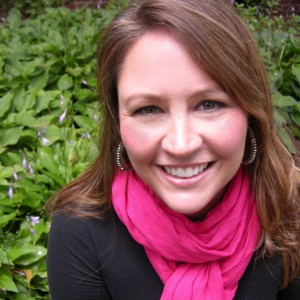 Heather Webb is an author of historical women’s fiction, editor, and blogger at award-winning writing sites WriterUnboxed.com and RomanceUniversity.org. Kirkus Book Reviews called her debut novel, BECOMING JOSEPHINE, “exceptionally concise and colorful,” and the New York Journal of Books said “Webb holds up a light into the inner recesses of a fascinating and contradictory woman.”