Happy Pub Day to Kelly Simmons and The Fifth of July

Today is an extra special day as we have three Tall Poppy books releasing. We announced Ella Olsen’s launch for WHERE THE SWEET BIRD SINGS last week. First up today, we’re celebrating THE FIFTH OF JULY by Kelly Simmons. Check back later today for Cathy Lamb’s NO PLACE I’D RATHER BE. 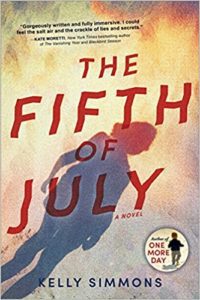 As The Warner family gathers for a summer vacation on peaceful, secluded Nantucket Island, the anniversary of a tragedy many years ago threatens to overshadow the myriad of other problems awaiting their ferry — a rapist on the loose, a battle over real estate, the declining health of two parents, and workers who see everything that happens, even when they shouldn’t.

If your favorite part of Downton Abbey was seeing how the maid and butler were smarter than the family . . .  if you fought with your brother constantly but also love him dearly . . .  if you ever wondered who to worry about more, your twelve-year-old daughter or your 70-year-old mother–THE FIFTH OF JULY is for you.

To celebrate her launch, Kelly Simmons tells all…

What’s your secret or not-so-secret superpower?

Writing! Hahaha,no seriously, I can almost always tell when someone is lying. (My girlfriends used to ask me to suss out their boyfriends when they were suspicious.) And yet my characters are not quite as good at this, and find themselves in hot water all the time.

A librarian. I had a card catalog for all of my books, arranged by subject, title and author. And I lent them to my friends and charged them late fees!  I also sold troll clothes, but that didn’t seem like a legit job:  Couture Designer for Trolls.

Have you ever tried writing in a different genre? How did that turn out?

I wrote a historical fiction story that I loved – but my publisher didn’t.  And my lighter, comedic work has not interested any agent or publisher. My former agent once said, “There are maybe 3 comedic female authors who aren’t standups. Stop this madness.”  But all of my books, even the darkest ones, have humor.

Has anyone ever thought a character you wrote was based on them?

My characters are so messed up, no one would ever admit to such anger problems, lack of forgiveness, and adultery in their hearts!

Kelly Simmons is the author of the critically acclaimed novels Standing Still, The Bird House, One More Day, and The Fifth of July. In addition to Tall Poppy Writers, she’s a member of Women’s Fiction Writers Association and The Liars Club. She has way too many children, dogs and cats.