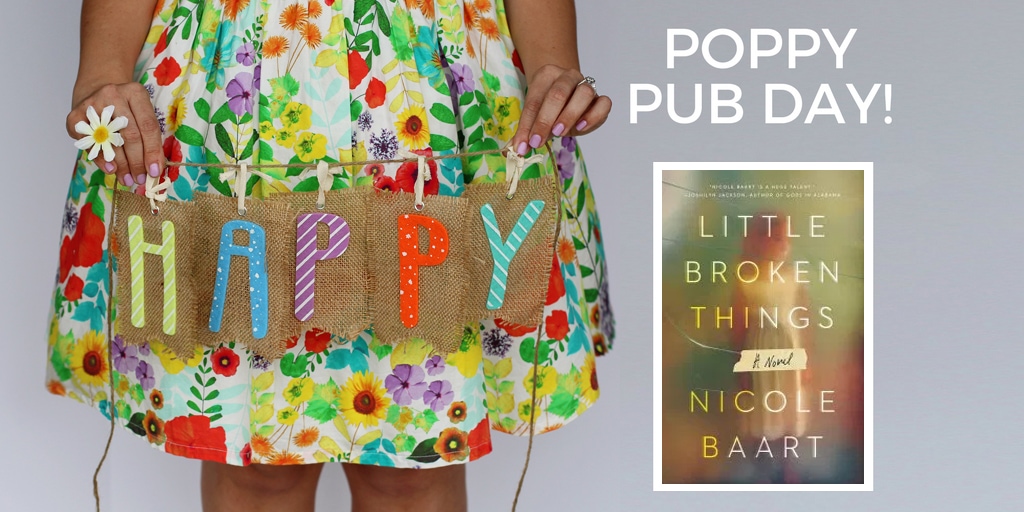 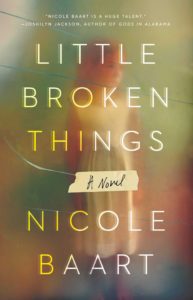 ​An engrossing and suspenseful novel about an affluent suburban family whose carefully constructed facade starts to come apart with the unexpected arrival of an endangered young girl.

What Nicole Had To Say About Writing Little Broken Things

“Little Broken Things came out of the months that I spent becoming a mother to my newly adopted 6-year-old daughter. We brought her home knowing that she had some pretty severe medical needs–but we were still unprepared for the emotional journey that would shape our story. I wanted to write about what it means to find home, and what makes a mother.

I tend to write about my own life experiences years after the fact. It’s a subconscious pattern that one of my reviewers pointed out, and that I can now see quite clearly. My kids are older (for the most part), so I feel like I can write knowledgeably about a six-year-old, but I have the emotional distance to do so without my subject matter triggering deep or problematic responses. Writing about a small child experiencing trauma when my own children were that age would have been too difficult. But it was helpful, even healing to face some of my fears head on in Little Broken Things. I hope this story finds resonance with a wide variety of readers! I think if you have loved a child and longed for home, this book will strike a chord with you.”

​What People Are Saying

​”Baart’s pacing keeps the novel driving forward, while a core group of narrators offers different perspectives on the murky facts of Lucy’s upbringing. Full of twists and turns, this is a great addition to the recent surge in suspenseful domestic fiction.” ​- ​Booklist

“Richly atmospheric and featuring a compelling cast of sharply drawn female characters, Little Broken Things is both a page-turner and a thoughtful examination of what it means to mother and be mothered, in all its most real and varied forms.” ​- ​Kimberly McCreight, New York Times bestselling author of Where They Found Her

“Beautifully layered…gives readers everything they could possible want in a novel – vivid, engaging characters, a town filled with dark secrets, a mind-twisting mystery and the ferocious power of a mother’s love. Original and gripping, Little Broken Things is a stunner that will linger with you long after the final page is turned.” ​- ​Heather Gudenkauf, New York Times bestselling author of Not A Sound)

“If you liked Big Little Lies, you’ll want to crack open this new novel by Nicole Baart, which will be released in November—just in time for your Thanksgiving holiday reading. This novel will engross you in the suspenseful story of Quinn Cruz; her estranged and troubled sister, Nora; and a mysterious little girl named Lucy who shows up on her doorstep.” ​- ​Southern Living

“Nicole Baart weaves exquisite writing with unstoppable drama in this tale of family schisms and secrets on a collision course with life-threatening danger. Putting down Little Broken Things was impossible.”​ – ​Randy Susan Meyers, bestselling author of The Widow of Wall Street

“I have long been a fan of Nicole Baart’s finely crafted, flawed characters, her deft plotting, her fluid, lovely writing, and all of these gifts are on display in Little Broken Things. I cared about these sisters, feared and hoped for them, and lost my heart to Lucy, the locked-shut little girl living in the center of the book’s secrets. It’s a gripping and suspenseful tale that kept me turning pages late into the night; move it to the top of your stack.” ​- ​Joshilyn Jackson, New York Times bestselling author of The Almost Sisters

“Nicole Baart has outdone herself with this lush, evocative family drama full of shocking twists and a heart-warming grand finale. I will think about the Sanford family for a good long time. Put Little Broken Things on your fall reading list now!”​ – ​Kate Moretti, New York Times bestselling author of The ​Blackbird Season

​Nicole Baart is the mother of five children from four different countries. The cofounder of a non-profit organization, One Body One Hope, she lives in a small town in Iowa. She is the author of seven novels​.​