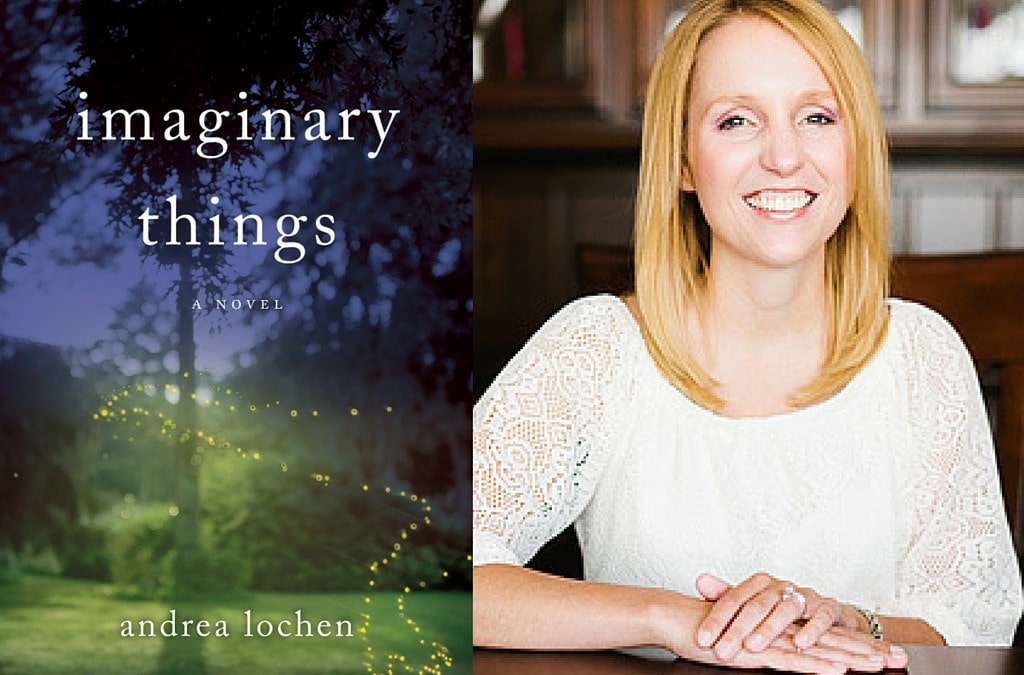 Hello Tall Poppy Readers! Today we get to know one of our Poppies a little better. Andrea Lochen, author of IMAGINARY THINGS and THE REPEAT YEAR stopped by to share a bit about herself!

Andrea’s second novel, IMAGINARY THINGS is the story of a mother who discovers one summer she can see her son’s very active imagination. PEN/Bingham prize-winning author Susanna Daniel called it “a witty modern fairy tale about a down-on-her-luck young mother, her erratic ex, and her charming four-year-old boy. Anna is not your typical overwhelmed mom, but her story feels like a friend’s. Imaginary Things reminded me again and again that the act of raising a child is a love story, a test of strength, and a thrill ride.”

I went through a phase in high school (and briefly in college) where I thought I wanted to be a doctor. I was a bright student (not to toot my own horn, but I was one of the valedictorians of my graduating class—there were nine of us!) and when people asked me what I wanted to be, I felt like I needed to say something duly impressive. “Doctor” seemed to fit the bill. I also enjoyed my biology and human anatomy classes, so why not?

But when I arrived at the University of Wisconsin and saw all the required science courses I would need to take to be pre-med and realized my propensity to pass out at the sight of blood, my conviction quickly wavered. I soon discovered the Creative Writing department, which is where I found my tribe and my true calling. My high school sweetheart (who later became my husband) stayed true to his path to becoming a doctor however, so I saw firsthand what a challenging road it was. I can definitely say that despite all the ups and downs I face as a writer, I still think I chose the best career for myself!

Share one quirk you have that most people don’t know about.

I’m a “super taster” which means I still have a lot of my taste buds and therefore prefer bland foods to spicy ones. In essence, this makes me a pretty picky eater, which can be really embarrassing at times! I hate to offend people or make them feel like they have to accommodate me. Some of my favorite foods are cheese pizza, macaroni and cheese, and chicken breast, which I think qualifies me to sit at the toddler table. (I should mention, however, that I don’t discriminate against desserts. I seem to love all desserts, unfortunately.)

My one-year-old daughter! Several times a day she does something that cracks me up. She finds our dog, a Bichon-Shih Tzu mix called a teddy bear, absolutely hilarious. If we’re throwing a squeaky toy for her, whenever our dog runs by with it, my daughter starts giggling hysterically, sometimes so much so that she tips herself over. And then I tend to start giggling hysterically. Her laughs are so contagious. I’ve made several short videos of her laughing because I don’t ever want to forget the sound of her babyish giggles. They’re one of my absolute favorite sounds in the whole world.

What are the hardest and easiest things about your job?

As a writing professor at UW-Waukesha, the hardest thing about my job is all the grading. I have about one hundred students each semester, and each student turns in about five stories or essays each semester, and each story or essay is between two to twenty pages, which if you do the math is…well, this is why I’m not a math professor! But take my word for it that it’s a HUGE STACK of paper. So during the semester, I spend a lot of time commenting on student work and virtually no time on my own writing or reading. But the best thing about my job hands down is interacting with the college students. They are so much fun and I learn so much from them every day—new slang, different viewpoints, and experiences, etc. And it’s so much fun seeing how ambitious and creative and wildly outlandish they can be with their stories. It reminds me every day to take risks in my own writing and not to lose that original spark.

What’s your next big thing?

While my daughter is napping, I have been slowly but surely working on my third book which is about two sisters and the lake house that has been in their family for a century. I don’t want to say too much about it since it’s still so new and such a work in progress, but like my first two novels, it’s also set in Wisconsin and involves a magical premise. It’s my first book told in alternating perspectives, and I’m having so much fun writing it! I hope to finish the rough draft of it this summer.

Thanks for stopping by Andrea! You can learn more about Andrea and her brilliant books at one of the many internet corners that she visits.