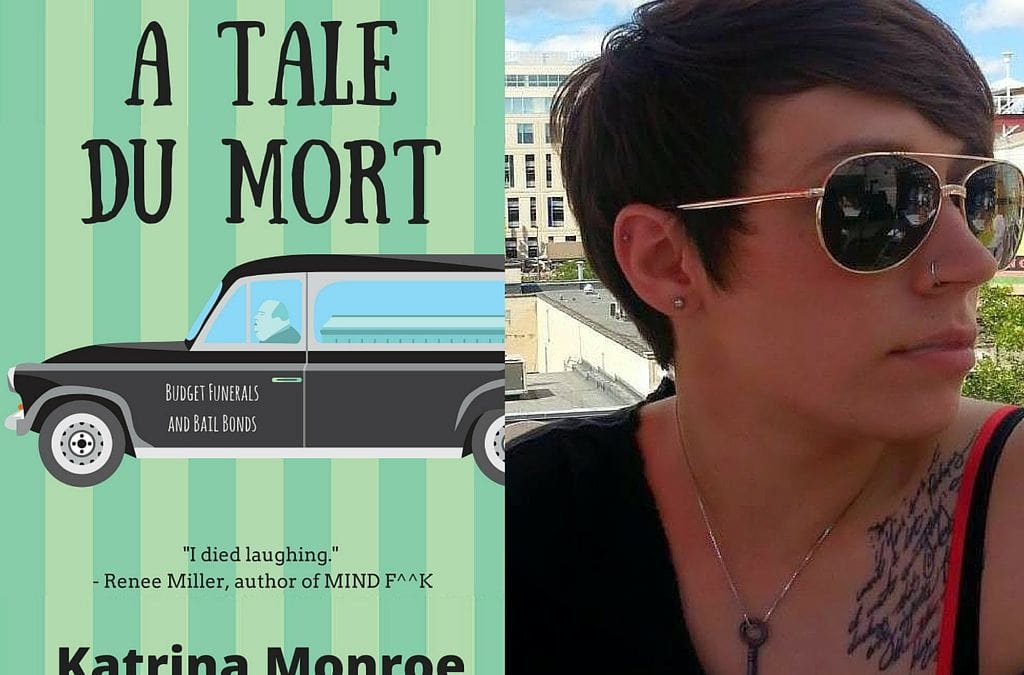 Hello, dear readers–we have something special to celebrate Independence Day weekend — we have our first Indie author guest, Katrina Monroe. Here’s a bit about her most recent novel, A TALE DU MORT (and we just love the cover). 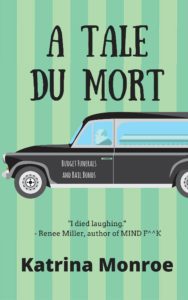 Mort Oleander wasn’t always the assistant embalmer to the world’s worst funeral director. Once upon a thousand years ago, he was the G.O.D. (General Operations Director) of the dead, kicked out of the job thanks to corporate-wide strikes led by his brother, Sy.

Faced with mountains of paperwork and a staff high on revolution, Sy decides he’s acted rashly. His afterlife was meant to be margaritas and getting caught in the rain, not Mort’s. Ignoring the inevitable consequences, Sy brings Under out of the dark to mingle with the living.

Assisted by a trio of seamstresses living semi-retired in Florida and his ex-girlfriend’s daughter, Mort must stop Sy before the Veil dividing Under and Above is destroyed.

This sounds hilarious! I can’t wait to read it. Katrina shares her thoughts on comedy writing in her great post below!

SEND IN THE FOOL
A few years ago I was watching an interview with one of my favorite authors, Christopher Moore. He talked about the typical things: writing, touring… but when he talked about his novel, FOOL, he said something that stuck with me: It’s the comedians, the fools, that tell the truth to power. I’m paraphrasing, but the message is the same.

Though he wasn’t necessarily referring to authors, there’s no doubt in my mind that the same applies to us lowly comedy writers. It’s not that other genres don’t mirror the society in which it’s written. I’ve read hundreds of literary and commercial novels that paint a scathing portrait of the world, leaving me with a rock in my gut and a mild desire to Do Something but a bigger desire to eat ice cream and pretend it all doesn’t exist.

But here’s the big difference: Comedy, she is like a woman. With comedy, you’ve lost the argument before it’s even begun—before you have the chance to put up your lesson-deflecting walls, the story is in your head, influencing you, because everything is easier to accept when it’s backed by a laugh track. Anyone who’s read Terry Pratchett will agree. The man could turn a phrase, but his lessons lurked somewhere deep beneath the words, just waiting to latch their suckers to your brain.

But even the man Pratchett is a statistical anomaly.

Most of the indie authors I know write some form of comedy—satire, black comedy, fantasy humor. And all of them have mentioned how hard it is to find “legitimacy” with their chosen genres, which, as we all know, can only be given after a virgin sacrifice beneath a harvest moon while it sits at certain coordinates, which are given at the bottom of a Random House publishing contract.

I wish I could say I made the choice to be an indie author. At least then I’d be cool. Like, hipster cool. I’m an indie author because (according to my pitch responses) I’m “a talented writer with an exceptional voice” but “[vague blah blah not for me *fart noise*.]” That vague blah blah fart noise is industry speak for “I have no idea how to sell it.” After hundreds of emails like this, I tried restyling my brand by making my comedy softer, more approachable. More Ellen Degeneres, less Louis C.K.

Ellen and I are homies (at least in my mind), but that Let’s Not Offend Anyone style of comedy isn’t for me. It isn’t the truth. My lady characters curse and talk about boobs while running from the Patriarchy monster with its gnashing teeth and archaic abortion rhetoric.

It wouldn’t have helped, anyway. Writers like Nick Cole know—when the comedy is “too real,” even a Big Six contract can be broken.

It’d probably be more lucrative to abandon it all and write a cozy mystery or a romance. I could buy the name-brand cereal and not peddle limericks at the corner for a dollar. I could dress my children in actual clothes rather than dresses made of manuscript pages. But it wouldn’t be nearly as fun.

With a world full of brown-nosing courtiers, tittering ladies, and proclamation scribbling blow-hards, someone has to wear the jingly hat. Someone has to encourage the chuckles when there’s nothing to chuckle about. It might as well be me, just as it might as well be all the other fools out there. The looming threat of legitimacy shouldn’t make you second-guess that joke. Tell it. We’re all ears. 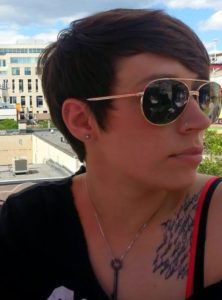 Katrina Monroe is a former Floridian still trying to figure out “Minnesota Nice.” She writes comedy that occasionally draws an obligatory chuckle from her wife.