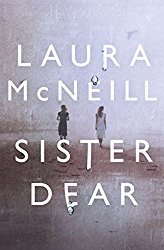 We’re excited to welcome Laura McNeill to the Tall Poppy blog today! Author of two suspense novels, Laura’s latest–SISTER DEAR–hit shelves April 2016, and RT Book Reviews had this to say about it: “… it’s an original twist on the wrongly accused victim trying to exonerate herself, and will keep readers interested throughout.” We’ve read it and couldn’t agree more!

Convicted of a crime she didn’t commit, Allie watched a decade of her life vanish – time that can never be recovered. Now, out on parole, Allie is determined to clear her name, rebuild her life, and reconnect with the daughter she barely knows.

But Allie’s return home shatters the quaint, coastal community of Brunswick, Georgia. Even her own daughter Caroline, now a teenager, bristles at Allie’s claims of innocence. Refusing defeat, a stronger, smarter Allie launches a battle for the truth, digging deeply into the past even if it threatens her parole status, personal safety, and the already-fragile bond with family.

As her commitment to finding the truth intensifies, what Allie ultimately uncovers is far worse than she imagined. Her own sister has been hiding a dark secret—one that holds the key to Allie’s freedom.

Here’s what Laura had to say about why and how she chose the setting for SISTER DEAR:

After considering several locations, I decided that coastal Georgia and the city of Brunswick were the perfect backdrop for SISTER DEAR, with its traditional, tight-knit community, gorgeous scenery, and its Deep South focus on football, faith, and family values.

When the novel begins, single mother Allie Marshall is about to go to medical school, and can hardly wait until she can start her new adventure in the big city of Atlanta.

As excited as Allie is, she remains nostalgic about her hometown and will miss Brunswick, St. Simons Island, and the ocean, which all represent the special place where she grew up with her parents, her sister, Emma, and her boyfriend, Ben.

But when tragedy strikes, and Allie finds herself accused of a horrific crime, she goes to prison for ten years. Each day, she vows to return, clear her name, and promises herself she will find a way to reconnect with her teenage daughter.

Allie endures much hardship in prison, and in preparation for the writing of SISTER DEAR, I watched a lengthy documentary about life behind bars in Georgia.

I hope that in reading Allie’s story, you’ll get a true sense of Brunswick, a taste of Atlanta, the feel of the beauty of St. Simons Island, and the danger inside Lee Arrendale State Prison.

We love hearing how authors choose their novel settings! Keep reading for Laura’s answers to the Tall Poppy Q&A, where she shares what’s making her happy right now, which talent she wishes she had, and what it was like meeting authors she idolizes…

Talk about one book that made an impact on you.

I absolutely adored White Oleander by Janet Fitch. The writing is brilliant, the characters are spot-on, and the storyline is so compelling. Every woman, it seems, has mother-daughter angst, and this book resonated with me on so many levels. It is a story of overcoming insurmountable obstacles after horrifying circumstances. In all, it is a story about survival and the power and strength of the human spirit!  (Runner up:  Midwives, Chris Bohjalian)

I bought a new house in Birmingham, Alabama with double front porches and a lovely view. I’ve been container gardening a bit and am surrounding myself with ferns and mums in bloom, which makes me happy! I am also blessed with great neighbors and a short drive to work!

Where do you love to be? 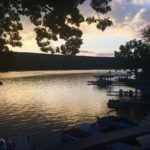 I love to be in Upstate New York, where I grew up, on the banks of Keuka Lake. My parents have a cottage there and my family has vacationed there since I was five years old.

This time of year is my favorite, when the leaves are changing color.

Which talent do you wish you had?

To do twice the work in half the time!  I’m juggling a lot right now, between a relatively new job, graduate school, consulting work, and writing. I try to do some volunteer work and just participated in a Habitat for Humanity Build in Birmingham – very fun! I occasionally visit book clubs, as well, and am heading to Atlanta in November to speak to a library group near Decatur. Squeeze in a little friend-time and cheering on Ohio State and the Crimson Tide (as long as they aren’t playing each other!), and I’ve run out of hours in the day! I have to remind myself to stop, count my blessings, and watch the sunset every once in a while.

Have you ever met someone you idolized?  What was it like?

Joshilyn Jackson and Chris Bohjalian. I was a total fan girl. Both times were talks in Fairhope, Alabama at my favorite indie bookstore, Page and Palette. They were both so nice, down to earth, and genuine. Joshilyn Jackson ended up endorsing Center of Gravity, which was a HUGE thrill for me.

Thanks so much for stopping by, Laura, and all the best with your next project! 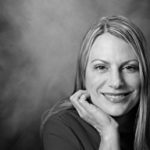 is a mom, daughter, sister, aunt, friend, instructional designer, graduate student, and author of two recent suspense novels, CENTER OF GRAVITY and SISTER DEAR. She began her writing career in 2011, publishing women’s fiction set in the Deep South, and moved into the suspense genre in 2015 when she was offered a book deal with HarperCollins. In her spare time she enjoys yoga, travel, time with friends and family, decorating her new house, and reading! Find Laura on Facebook, Instagram, Twitter, Goodreads, and her website.