We’re thrilled to welcome New York Times bestselling author Mary Kubica to the Tall Poppy blog today! Mary writes page turning psychological thrillers that will keep you guessing (while also keeping you up all night), including her most recent Don’t You Cry (May 17th/Mira Books — don’t miss this one!)  In today’s post Mary shares how important setting is to a novel, why she’s chosen Chicago as the backdrop for her books, and the influence of “place” on her characters …

In real estate it’s all about location, location, location. You can make changes to your home – new paint, new flooring, new décor – but it’s rare that you can pick up your house and move it to a better or a different location. In literature, setting is just as important. Not only does it help with character development – where we’re from is often part of who we are – but it helps transport the reader into our characters’ worlds, seeing the same sights that they see, hearing the same sounds, breathing the same air.

I choose to set my novels in Chicago because it’s where I’m from and who I am. Chicago is a vibrant city nestled on the shores of Lake Michigan, with wonderfully diverse people, known well for its architecture, its music and perhaps best of all, its food. Excluding the suburbs, the city is divided into seventy-some neighborhoods, and each one is unique, which provides me with ample opportunities to explore different parts of Chicago in my novels and keep them from feeling redundant. My latest novel Don’t You Cry opens in the neighborhood of Andersonville, a hip and distinctive area on Chicago’s North Side, flourishing with independent shops and an energetic nightlife – perfect for a character like Quinn Collins and her roommate, Esther Vaughan, young twentysomethings who are celebrating newfound independence and navigating their way into the real world. Esther works in an independent bookstore in the neighborhood (purely fictional, though Andersonville is home to one of my favorite indies in the city, Women & Children First), while Quinn commutes on the city bus into the Loop where she works in a law firm. The hectic pace of the city is brought to life in their everyday experiences, from meeting urbanites on the city bus, to the constant drone of nighttime noises, to Quinn and Esther’s digs, a small apartment that comes with a moody landlord and an exorbitant price tag, which is sometimes part and parcel of urban living.

But when Esther goes missing one November morning – vanishing from bed though leaving items behind that lead Quinn to wonder how well she really knows Esther – Quinn’s life veers unexpectedly off course.

The entirety of Don’t You Cry is not set in Chicago. By comparison, half of the novel follows the life of an eighteen-year-old boy named Alex, who’s living in a small town in Michigan’s Harbor Country, a fictitious blend of cities like St. Joseph and Benton Harbor, ones where I’ve vacationed myself many summers as a child. The beaches are endless, albeit cold, and the sand is lush and profuse with sand dunes that rise up into the sky like the foothills of a mountain range. The towns are charming and idyllic, abounding with restaurants and small shops like the café where Alex works as a dishwasher. They’re towns that rely on a profitable tourist season to get them through the year, the frenzied pace of the summer months replaced with quiet and solitude when fall draws near, which is where Alex’s story begins – a cold, autumn morning well before sunrise as he makes the trek to work beside Lake Michigan’s shore, only to discover a new arrival to town, a beautiful young woman he soon nicknames Pearl.

In Don’t You Cry, the chaos of the city is contrasted with the slow serenity of life in Alex’s town, as these two characters, Quinn and Alex, who have strikingly different temperaments and lead vastly different lives, tumble down a rabbit hole of obsession and lies at the hands of one woman.

Thank you Mary for stopping by and sharing your wisdom, and best of luck with Don’t You Cry! 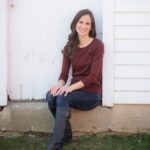 Mary Kubica is the New York Times and USA Today bestselling author of THE GOOD GIRL, PRETTY BABY and DON’T YOU CRY.  She holds a Bachelor of Arts degree from Miami University in Oxford, Ohio, in History and American Literature, and lives outside of Chicago with her husband and two children, where she enjoys photography, gardening and caring for the animals at a local shelter.  Her first novel THE GOOD GIRL received a Strand Critics Nomination for Best First Novel and was a nominee in the Goodreads Choice Awards in Debut Goodreads Author and in Mystery & Thriller for 2014.  She is currently working on her next novel. Visit Mary on her website, or get social on Facebook and Twitter.