Every so often, I wrinkle my nose at a book cover I find dumb, or derivative, or obvious, or just an icky color that reminds me of having food poisoning.

Yet I pick it up and open it anyway.

Sometimes being repelled means something, like:  Don’t be so judgy, Kelly.  Someone spent years writing this. Give it a TRY. 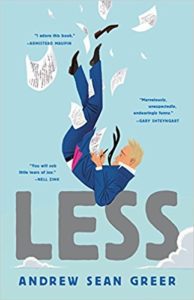 Such was the case with LESS, by Andrew Sean Greer.  I know, a MAN wrote it.   And I the cover felt like a Mad Men rip-off, which irritated me.  But then I gave it a second chance.  What is happening to me?  Have I gone soft?   How did I get mixed up in this tome with this dude?

Simple.  I opened it because I thought the title was crazily bold to the point of absurdity. So short. So negative.  And yet, huge, in caps.  Who would do such a thing? Who would pound a reader over the head with this title?  Madness!

I usually prefer female authors by a landslide, but this mid life crisis road trip mixes universal themes of love, grief, and career angst brilliantly, and simply, and with a healthy dose of humor.  There were paragraphs in it that made me stop and sigh with appreciation and recognition.  And the moment I finished it, I wanted to start all over again.

Which is the biggest compliment I can give.  They should have titled it MORE.

Kelly Simmons is the author of the critically acclaimed novels Standing Still, The Bird House, One More Day, and the just-released The Fifth of July. In addition to Tall Poppy Writers, she’s a member of Women’s Fiction Writers Association and The Liars Club. She has a lot of children, dogs and cats, but not much jewelry.