I am excited to offer up a #PreFridayReads this week because my passion is historical fiction. I’ve researched and written a lot of it, and read even more. 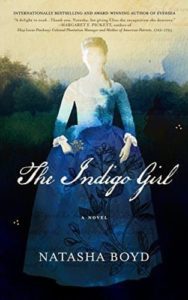 Natasha Boyd’s THE INDIGO GIRL is historical fiction at its finest. The prose is elegant—and the story is enticing from beginning to end. Boyd’s well-chosen words glitter as they sweep across the pages deftly drawing the reader in and refusing to let go. I was surprised at how quickly I came to care about a young 18th Century girl’s fight to make indigo dye in order to save her family when they are in danger of losing everything. All of her characters are beautifully drawn and the romance entirely caught me up. So did her sensitive portrayal of slavery. For lovers of history, this novel is a must read.

So begins an incredible story of love, dangerous and hidden friendships, ambition, betrayal, and sacrifice.

Based on historical documents, including Eliza’s letters, this is a historical fiction account of how a teenage girl produced indigo dye, which became one of the largest exports out of South Carolina, an export that laid the foundation for the incredible wealth of several Southern families who still live on today. Although largely overlooked by historians, the accomplishments of influenced the course of US history. When she passed away in 1793, President George Washington served as a pallbearer at her funeral.

This book is set between 1739 and 1744, with romance, intrigue, forbidden friendships, and political and financial threats weaving together to form the story of a remarkable young woman whose actions were before their time: the story of the indigo girl.

Natasha Boyd will be my guest on BLOOM Wednesday November 8th from 2 – 3pm EST. You can buy her book here. 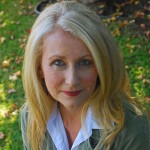 DIANE HAEGER, who also writes as Anne Girard, holds a master’s degree in Clinical Psychology and a bachelor’s degree in English Literature and is the author of 16 novels, both historical and contemporary. She has moved back and forth through time, from writing about the lost loves of William Tecumseh Sherman and Pablo Picasso, to crafting a series set in Tudor England titled “In the Court of Henry VIII.” Since the publication of her acclaimed first novel Courtesan in 1993, a novel that remains in print today, her work to date has been translated into 18 languages bringing her international success and award-winning status.
Visit her website at: www.dianehaeger.com | Visit her Amazon author page