So I have this theory that when people say they LOL’d, they didn’t actually laugh out loud. They just found something particularly funny. Maybe they grinned. Or snorted a little bit. 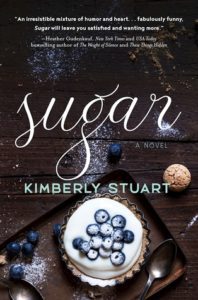 But a from-the-belly laugh out loud? I think they’re hard to come by. Which is why it’s so noteworthy that when I was reading SUGAR by the charming, witty, and yes, incredibly funny Kimberly Stuart, I was delighted to find myself truly LOLing. And smirking and smiling and cheering Charlie on with all my might.
SUGAR is the story of Charlie Garrett, an up-and-coming pastry chef in a high profile restaurant in New York City. After struggling for years to work her way to the top, Charlie realizes in one clarifying moment that her dreams will never come true—at least, not in NYC. Enter ex-boyfriend Avery Michaels who approaches Charlie with the offer of a lifetime: her own kitchen as head pastry chef at the new culinary hotspot Thrill. The only catch? Thrill is in Seattle.
Charlie makes the cross country move with a mixture of excitement and reluctance, and soon finds herself swept up in the world of a trendy new restaurant. But it doesn’t take long for her to learn that Avery is interested in more than her magical way with sugar. Thrill isn’t just a new restaurant, it’s also the set for a new reality TV show about the restaurant business—and Charlie is their quick-tongued, lovely star. The problem is, she’s not sure she wants to be.
On the cusp of realizing her lifelong dream, Charlie finds herself balancing not just reality show stardom, but also friendship, her own expectations, and a chance at love. Yes, SUGAR is a love story, but it’s also a sometimes painful and very realistic look at the connection between ambition and romance, about finding ways to have both a career and true relationships. (Spoiler alert: we all know it’s not easy.)
From the very first page SUGAR swept me away. It was a delightful, delicious read filled with characters that I genuinely cared for and a plot that kept me coming back for more. Stuart’s comedic timing and strong female role models had me cheering as I devoured Charlie’s story. I recommend SUGAR to anyone in the need of a lighthearted, happy read. It’s perfect for the beach, your backyard, or standing at the kitchen counter as you whip up your own sweet concoctions. (I may or may not have read while baking banana muffins for my kids and I may or may not have overdone them. Slightly.) Best of all? I believe that SUGAR will make you LOL.
From Goodreads:
After realizing her coworkers at L’Ombre, a high-profile restaurant in NYC, will never appreciate or respect her, Charlie Garrett allows her ex-boyfriend, Avery Michaels, to convince her to work for him as executive pastry chef at his new Seattle hotspot, Thrill. She’ll have her own kitchen, her own staff—everything she ever wanted professionally.When she arrives at Thrill, however, she realizes that Avery wanted more than a pastry chef for his restaurant—he wanted a costar for the reality show they’re filming about the restaurant and its staff. Charlie is uncomfortable with the idea at first, but she soon realizes that this is her chance to show the world what women in the kitchen are capable of. She sets some ground rules with the film crew, signs a non-disclosure agreement, and promptly meets the man of her dreams, Kai, off-camera.The show, and her demanding work schedule as head of the pastry kitchen, makes it nearly impossible for Charlie and Kai to spend time together. Drama on and off the set soon take a toll on Charlie’s well-being, forcing her to choose if life in front of the camera is worth sacrificing life behind the scenes.Sugar is a contemporary romance, set in the high-pressure commercial kitchens of New York and Seattle. A funny and clever story of how a female chef learns to thrive in the ruthless world of premier restaurants.
About Nicole 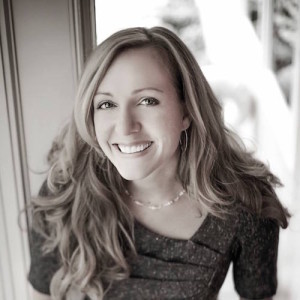