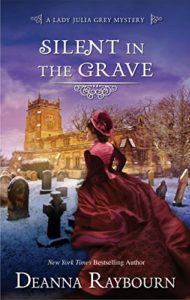 Over the past few weeks, I’ve read all five novels in the Lady Julia Grey mystery series by Deanna Raybourn: Silent in the Grave, Silent in the Sanctuary, Silent in the Moor, Dark Road to Darjeeling, and The Dark Enquiry. (There are four novellas that follow—I have not read them yet, but I will.)

I only intended to read the first novel before writing this book review.

Let’s delve into the first book, shall we?

Lady Julia Grey, née March, is the second youngest of ten children and the daughter of the very wealthy and influential Earl March. She has always been the most ordinary of her siblings, marrying a perfectly ordinary baron named Edward Grey and seeking a perfectly ordinary life. That is, until Edward keels over dead at a party at Grey House in London.

Even more curious: after Edward’s death, a strange man—a private enquiry agent of all horrid things—appears on her doorstep. The agent, named Brisbane, insists that Lady Julia’s husband was murdered. Offended by his words, Lady Julia turns the man away.

But then, to her even greater horror, she finds evidence that the agent was right about Edward’s murder. She seeks Brisbane out again. Brisbane, it turns out, was hired by Edward himself because someone had been threatening Edward before his death. Lady Julia retains Brisbane to solve the murder. But there’s more to the investigation than the investigation—Lady Julia finds herself intrigued by investigative work, and, more surprisingly, by Brisbane himself.

And so begins the first book of author Deanna Raybourn’s Lady Julia Grey mystery series. Set in late Victorian London, the books span eight or so years—Lady Julia is in her mid-twenties when she is widowed; she is in her early thirties in the fifth book. The March family siblings make up a delightful cast of background characters; I’m particularly fond of Julia’s sister Portia, her best friend and confidante.

One interesting facet I enjoyed: these books do a wonderful job giving a sense of the era, in particular of the class and racial prejudices that the highest of the aristocracy would have held, even those as forward thinking as the March family. In this way, the books pull no punches, shining a light on the times without glorifying things.

Katie’s latest novel, FALLOUT GIRL, comes out on May 7, 2018, and is available now for preorder. She is the author of the Hollywood Lights Series, which includes ENTANGLEMENT (2015), LOVE AND ENTROPY (2015), CHASING CHAOS (2015), and HOW TO STAY (2017), all with Blue Crow Books. She is also the author of many books of nonfiction, including LIFE OF THE MIND INTERRUPTED: Essays on Mental Health and Disability in Higher Education (Raven Books 2017).