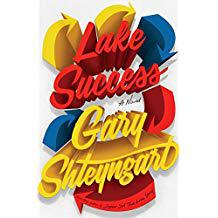 Some novels you want to race through simply to see what’s going to happen next. Lake Success, by the incomparable Gary Shteyngart, is so sharply written that despite its rollicking, road-trip plot, I urge you to read s-l-o-w-l-y so you don’t cheat yourself out of the brilliance of the writing. (“He had been in Asian households before and was familiar with their war on shoes.” “People were snoring like they had entire planets up their nose.” And much, much more.)

You may not think that a Manhattan master-of-the-universe—a hedge fund king, naturally, because the book takes place a few years ago—would be a sympathetic protagonist. But Barry Cohen, Princeton grad, watch collector and narcissist, is, simply because his observations about America are spot on. As he travels across the country by Greyhound Bus (“the Hound”) to escape the Securities & Exchange Commission and the painful reality of his three-year-oldson being diagnosed as severely autistic, his emerges as a sweet, self-deluded jerk with a knack for making money but no clue on how to be a father or a husband to his lovely but overwhelmed young, first-generation wife.

As Barry’s journey develops, it becomes increasingly poignant, even if he is part of the 0.1 percent. Don’t miss this book.

More about the book.

Sally, former editor-in-chief of McCall’s, is the author of the novel The Widow Waltz (2014), the nonfiction book Slouching Toward Adulthood: How to Let Go So Your Kids Can Grow Up (2013), and many other books.

More about Sally on her bio page.