#PreFridayReads: The Arrangement by Sarah Dunn 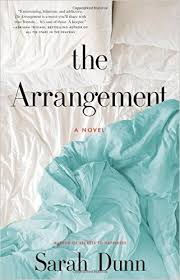 How Far Would You Go to Spice Up Your Marriage?

The Arrangement by Sarah Dunn may be my favorite book of the summer.  Its wit bounces off this page, but it’s not just laugh-out-loud clever, it’s smart, realistically exploring the price one couple pays while trying to put some sizzle back into a marriage they fear is going stale. The novel’s focus may be sex-sex-sex, but intimacy is described in terms both delightfully sweet and rocking funny, neither explicit nor especially erotic. The setting is a bucolic village along the Hudson River where a transgender kindergarten teacher is causing divisions in the local populace, which includes a billionaire who relaxes by watching YouTube videos of a towel-folding Marie Kondo wannabe and the main female character’s outspoken BFF, Sunny Bang.

Did I mention that this book is hilarious? Yet despite its comedic tang, the portrait of what it’s like to raise an autistic child is one of The Arrangement’s strengths. Owen and Lucy are the forty-something parents of a dearly loved on-the-spectrum son who tries their patience to the point of exhaustion. Even those of us whose kids are neurologically typical can relate to Dunn’s descriptions of parenthood.

Some of you may remember the author from her earlier two novels, including her debut in 2004, The Big Love, (not to be confused with the terrific television series about multiple marriage in the Mormon community.) I loved her work then, and I love it now.  When not writing fiction, Ms. Dunn’s is the executive producer of the popular TV sitcom, “American Housewife.”

Sally, former editor-in-chief of McCall’s, is the author of the novel The Widow Waltz (2014), the nonfiction book Slouching Toward Adulthood: How to Let Go So Your Kids Can Grow Up (2013), and many other books. You can learn more at http://sallykoslow.com.