#PreFridayReads: The Girl with a Clock for a Heart by Peter Swanson 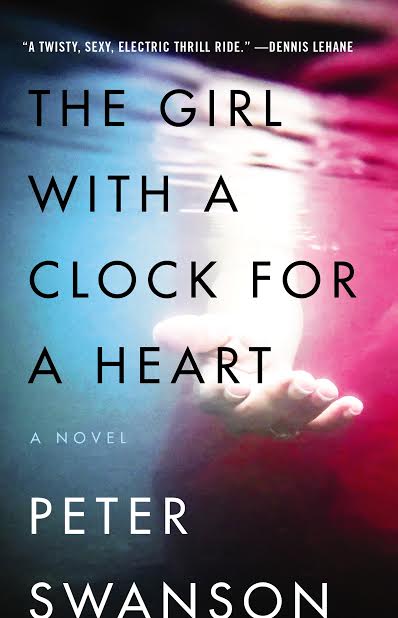 I picked up The Girl with a Clock for a Heart on a whim, and I’m so glad that I did! It was the perfect companion for a trans-Atlantic flight, and kept me riveted throughout. (I don’t sleep on planes, but it takes a special book to hold my attention during those long, agonizing hours!)

The protagonist in Peter Swanson’s story is George Foss, a bit of a doofus living a pretty rote, boring life. But when his college sweetheart materializes out of thin air more than twenty years after her sudden disappearance, George is tested in ways he never imagined possible. And he rises to the occasion in some very admirable ways. I quickly found myself cheering for him as he worked to unravel the mystery behind the girl he fell in love with so many years ago. Their adventure tests his compassion and decency, as well as his dedication to a woman he hardly knows.

While I liked George, I had very mixed emotions about his flame, Liana. She’s clearly a bad, bad girl… Or is she? By the final page of the book I still hadn’t made up my mind about her—but I decided that the ride was well worth it. The Girl with a Clock for a Heart is part thriller and part crime drama with a healthy twist of noir. The end leaves many questions still floating in the air, but I think that’s exactly the point. If you like your books fast-paced and twisty, and don’t mind a few loose ends, this may be the perfect pick for your next #FridayReads.

George Foss never thought he’d see her again, but on a late-August night in Boston, there she is, in his local bar, Jack’s Tavern.

When George first met her, she was an eighteen-year-old college freshman from Sweetgum, Florida. She and George became inseparable in their first fall semester, so George was devastated when he got the news that she had committed suicide over Christmas break. But, as he stood in the living room of the girl’s grieving parents, he realized the girl in the photo on their mantelpiece – the one who had committed suicide – was not his girlfriend. Later, he discovered the true identity of the girl he had loved – and of the things she may have done to escape her past.

Now, twenty years later, she’s back, and she’s telling George that he’s the only one who can help her…

Buy it from your local bookseller here