#PreFridayReads: THE MEMORY OF US by Camille Di Maio

To anyone who has followed me on social media, it’s no secret that I love to read historical fiction. Especially the bittersweet kind. Set it in 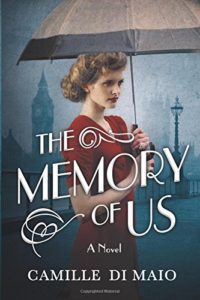 World War II and give it an enticing cover, and chances are you’ve sold me a book. I jumped into THE MEMORY OF US expecting the young English Debutante, Julianne Westcott, who pines after the dashing Irish seminarian, Kyle McCarthy, to have her idyllic life disrupted. I suspected she’d emerge from the war intact, if a lot older and wiser. I wasn’t wrong, But aside from knowing the war was coming and knowing neither character could emerge from it unscathed, I was brought along for  some heart-wrenching twists and turns that left me in awe of Di Maio’s skill as a storyteller. This is a beautiful story of love, family, duty, and sacrifice that earns a place in the ranks with Kristin Hannah and Pam Jenoff’s gripping works about the Second World War.

The prose is gorgeous, the characters engaging, and the story exquisitely crafted. The ending is more fulfilling that I can say without spoiling it. Suffice it to say, I was sobbing at the end–but in a good way. I had to leave in my ear buds in during during my daily walk despite having finished the book, lest my neighbors think me even weirder than they already do.

And yes, I highly recommend the audio version (I’m a recent convert to audio books to ease the pain of workouts and housecleaning) as it  is remarkably well narrated. They use a single narrator throughout who not only does a lovely job in her native English accent (naturally) as Julianne but also does well with Kyle’s Irish brogue and Mr. Westcott’s Liverpudlian English in particular. I usually listen to audio books at 1.25x speed, but suggest listening at the normal 1.0x speed for this particular title to appreciate the musicality of the narrator’s voice.

I enthusiastically recommend this book in any format for all fans of historical fiction. And you won’t want to miss her upcoming book BEFORE THE RAIN FALLS!

Julianne Westcott was living the kind of life that other Protestant girls in prewar Liverpool could only dream about: old money, silk ball gowns, and prominent young men lining up to escort her. But when she learns of a blind-and-deaf brother, institutionalized since birth, the illusion of her perfect life and family shatters around her.

While visiting her brother in secret, Julianne meets and befriends Kyle McCarthy, an Irish Catholic groundskeeper studying to become a priest. Caught between her family’s expectations, Kyle’s devotion to the Church, and the intense new feelings that the forbidden courtship has awakened in her, Julianne must make a choice: uphold the life she’s always known or follow the difficult path toward love.

But as war ripples through the world and the Blitz decimates England, a tragic accident forces Julianne to leave everything behind and forge a new life built on lies she’s told to protect the ones she loves. Now, after twenty years of hiding from her past, the truth finds her—will she be brave enough to face it? 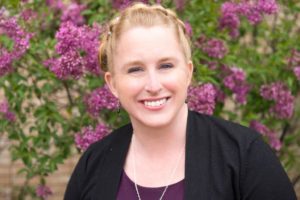 Aimie K. Runyan is s an author of historical fiction that celebrates history’s unsung heroines. Her first two novels, PROMISED TO THE CROWN and DUTY TO THE CROWN (Kensington), explore the lives of the early female settlers in Louis XIVs Quebec. Her forthcoming novel. DAUGHTERS OF THE NIGHT SKY (Lake Union, November ’17) follows the Night Witches, the fierce all-female regiment of combat pilots who flew for Russia in the Second World War. She is active as an educator and a speaker for the writing community and beyond. Aimie lives in Colorado with her wonderful husband and (usually) darling children. Learn more about Aimie and her work at www.aimiekrunyan.com