#PreFridayReads: THE PROMISE BETWEEN US by Barbara Claypole White 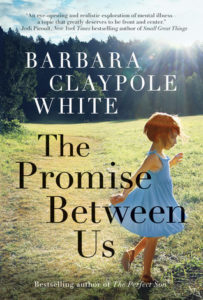 Katie Mack, the hero of THE PROMISE BETWEEN US, is a blacksmith—a metalwork artist living in Durham, North Carolina, and hiding from her past. To be fair, her past is rather worth hiding from.

Nearly ten years before, Katie abandoned her family when she believed she would try to kill her newborn daughter. Years later, still imperfect (aren’t we all) Katie has learned a lot about herself: that she has a tough-to-treat mental illness (especially when you’re uninsured, like she is), namely, OCD. She has also learned that her OCD is a particular kind, called “harm” OCD, which can be particularly frightening to people unfamiliar with it. Harm OCD shows a person intrusive thoughts of that person harming the people she loves most.

Ten years before, Katie’s OCD showed her repetitive, inescapable, intrusive thoughts of her harming her own baby, thoughts of actions Katie would never, ever do. When she shared those thoughts with her husband, he took their baby and locked Katie out. Katie ran, believing she deserved to be locked out and that she needed to protect her family from herself. In the intervening years, she learned she was wrong about the danger she posed, but by the time she figured things out, her husband’s lawyers had gotten involved. It was too late for her to come home. And her husband didn’t want her to.

After some dark struggles, Katie reinvents herself with metalwork. She finds her way to Durham…and eventually, to an unstoppable collision with the past she left behind.

THE PROMISE BETWEEN US forces readers to wrangle with some difficult questions: How does a woman make a life when she leaves her child behind? Who are you after your child is gone? And what do you do when you know your child needs you, desperately, to come back?

More on the book and buy links.

Barbara Claypole White writes “hopeful family drama with a healthy dose of mental illness.” The first book of White’s that I read was ECHOES OF FAMILY, and like THE PROMISE BETWEEN US, it delved into the ways mental illness, when left untreated or undertreated, can drive family and loved ones apart. THE PROMISE BETWEEN US is about parents, husbands and wives, close friends, siblings, and young love. And it is also about how mental illness weaves throughout those relationship, like all illness does, and how it requires support from loved ones, and money, and knowledge, and willpower, and all of our resources (and some luck) to tend. The characters are full of life and joy, and Maisie—the 10-year-old beating heart of the story—will bring you joy long after you finish the book.