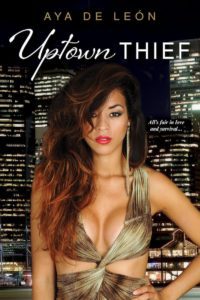 A glitzy Robin-Hood tale with a complex heroine you can’t help but love.

Aya de León’s UPTOWN THIEF (Book 1 of the Justice Hustlers series) features Marisol Rivera, who runs a health clinic and shelter for sex workers in the Lower East Side of Manhattan. But she didn’t always. Orphaned at a young age, Marisol and her younger sister, Cristina, lived with their abusive uncle until the day he died, when Marisol was only seventeen years old.

After his death, Marisol did everything she could to support herself and Cristina, including sex work. Years later, Marisol and her three best friends work to keep Marisol’s health clinic afloat financially until their new multi-million endowment can come through. Marisol runs the clinic, but she also runs an escort service, keeping her escorts safe and helping them earn a good living while they chase their dreams—whatever those dreams may be.

But right now, they have to make the mortgage on the clinic. Marisol, along with her crew—Nyesha, Kim, and Jody—are more than they seem. Not only does Marisol’s crew work as high dollar escorts by night, but they also run heists, Ocean’s-Eight style, robbing from wealthy abusers of sex workers to fund their clinic. But conflict is on the horizon when the cops catch a lead, and when an ex-cop from Marisol’s old neighborhood turns up on the clinic’s doorstep love in his eyes. Marisol doesn’t have time for love, or the room in her heart. Right?

I heard about UPTOWN THIEF when it was in a recent class of Debutante Ball novels. I was so pleased to find it. First, the book is a great story of one complex woman’s journey; it’s filled with both thrills and love. Second, the book does so many things well when it comes to shining a light on sex work: it validates sex work as real work. It shows how abusive pimps are abusive, period. It shows how police officers abuse sex workers. It shows how escorts can make good money doing their work if they find good (read: non-abusive) escort services to work for. Best of all, the books shows that sex workers are people—just people—doing their jobs. Such a thing shouldn’t be revolutionary, but it is.

De León discusses in a blog post how she got the help of sex worker activist to do a sensitivity read of her book. (Sensitivity readers help authors make sure that they portray the lives of people accurately, especially the lives of people who are often represented poorly in media.) The hard work paid off. While reading UPTOWN THIEF, I didn’t feel like a voyeur—like I have when reading about oppressed communities written by authors who haven’t done the kind of work de León did to get things right. With this book, I felt like I was reading about friends, just like when I read any other book. In this way, de León succeeded in writing a book about the people of an ostracized community, without rose-colored glasses (no Pretty Woman nonsense here), and you walk away pulling for them all.

UPTOWN THIEF reads as a standalone novel, but it is also the first book in the Justice Hustlers series. The next book, THE BOSS, features as its main character one of the women in Marisol’s crew.