Initially, I was hesitant to read WHEN BREATH BECOMES AIR because a beloved friend of mine recently lost her battle with ovarian cancer. It was heartbreaking and picking up a memoir about a young m 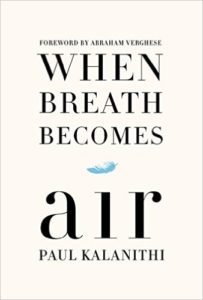 an who dies from lung cancer was almost more than I could consider. But I always muscle through our book club selections, no matter what. Sometimes the sacrifice is great (like last month when we read THE CORRECTIONS…ugh), but that’s another story.

To say WHEN BREATH BECOMES AIR was profound, is an understatement. Even now, months later, I find myself thinking about it. Yes, it was sad and there was the inevitable heaviness knowing that the author, who I was just getting to know and love, was no longer alive and that his written words were only echoes. But it was worth it.

What makes a life worth living? What parts of your identity are critical to continuing to crave life? The author, Paul Kalanithi trained as a neurosurgeon because he wanted to study how the brain, just another organ, makes each human unique. It is matter of identity and chemistry and the connection between the two was something he wanted to fully consider in his schooling and career. But when Paul was confronted with his own mortality, his theoretical musings were put to the ultimate test. The memoir, written while he was dying, is an amazing and unforgettable journey.

Here is the official description of the book:

At the age of thirty-six, on the verge of completing a decade’s worth of training as a neurosurgeon, Paul Kalanithi was diagnosed with stage IV lung cancer. One day he was a doctor treating the dying, and the next he was a patient struggling to live. And just like that, the future he and his wife had imagined evaporated. When Breath Becomes Air chronicles Kalanithi’s transformation from a naïve medical student “possessed,” as he wrote, “by the question of what, given that all organisms die, makes a virtuous and meaningful life” into a neurosurgeon at Stanford working in the brain, the most critical place for human identity, and finally into a patient and new father confronting his own mortality.

What makes life worth living in the face of death? What do you do when the future, no longer a ladder toward your goals in life, flattens out into a perpetual present? What does it mean to have a child, to nurture a new life as another fades away? These are some of the questions Kalanithi wrestles with in this profoundly moving, exquisitely observed memoir.

Paul Kalanithi died in March 2015, while working on this book, yet his words live on as a guide and a gift to us all. “I began to realize that coming face to face with my own mortality, in a sense, had changed nothing and everything,” he wrote. “Seven words from Samuel Beckett began to repeat in my head: ‘I can’t go on. I’ll go on.’” When Breath Becomes Air is an unforgettable, life-affirming reflection on the challenge of facing death and on the relationship between doctor and patient, from a brilliant writer who became both.

Here is a great interview with his wife on NPR, eleven months after Paul’s death. 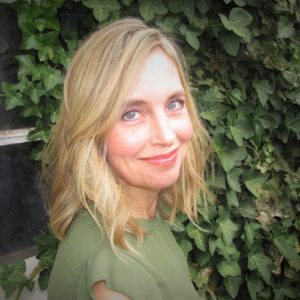 Ella Joy Olsen lives in Salt Lake City, Utah, in a century old brick bungalow with her husband and three children. She spent nearly a decade on the Board of Directors for the Salt Lake City Public Library system (and even more years browsing the stacks), and is a member of Tall Poppy Writers, Women’s Fiction Writers Association, and the best book club ever (SLC Bibliophiles). Visit her website at www.ellajoyolsen.com, follow her on Twitter at @ellajoyolsen, and find her on
Facebook.