Tell me a Story: Bonds That Break, Ties That Bind

Readers of my novels often ask, “How much of your stories are based on real life?” The answer, like many of the life stories we each live through, is complicated. What I can say is that while my novels are not autobiographical, my experiences, or at least the spirit of them, often find their way onto the pages of my books. For instance, when I started writing The Real Thing, a love story about a family in crisis and the effort it takes to lasso it back together again, I had already been in a blended family for several years. I knew just what it would be like to be my leading character because, in many ways, I was her, and her story continues. I wrote the following essay to show my readers why my novels all deal with the breaking and tying of family bonds, a process that is part of my real life story, and possibly a part of yours. 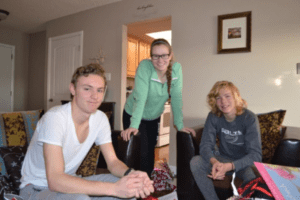 It hurts when bonds break and it can even hurt when we make new ones. There seems to be no other way.

I did a quick Google search on “bonds that break” and the above definition showed up at the top of the list. I know it’s a scientific definition, but immediately I was struck by how easily it translates to real life. Breaking bonds, whether it’s the loss of a marriage, a friendship, or a death is a process that takes energy. I should know. I have gone through a divorce. Personally speaking, it was the hardest thing I had ever been through at that time. Not even the loss of my Grandma, which broke my heart, caused that much pain. Probably because the loss of my Grandma could not be helped, but a divorce requires severing a bond. I remember a constant feeling of stress in my body, my heart, and my soul. Bonds hurt when they break.

And then came the man I’ve now been married to for thirteen years. The terrible energy I had been holding inside, the pain and sadness, began to release as we formed a new bond. At first it was all joy and the reaction in our lives was that of elation. We were happy. All previous sadness evaporated, or so we thought. As happens in every second marriage, and in every marriage, period, we had to go through stuff. Apparently some of the hurt and pain we had stored up inside of ourselves was still there, and we had to release it in order for our bond to grow.

My husband and I had been on similar journeys, so we kind of understood where the other was coming from when we met. Binding our lives together wasn’t impossible. In fact, it was amazingly easy at times, but marriage is real, right? Nothing is static. Nothing stays smooth. It’s like a million little exothermic reactions happening at once, especially when you have kids. I don’t really understand the scientific-speak of the definition for bonding, but in this case, it sounds like a good real life comparison to me.

There was a lot more going on in our new marriage than our family and friends could have imagined. We weren’t the only people in our messy beautiful family that had been holding in all that painful energy, either. Our children were in pain, too, so while we worked to reform new bonds in our lives and marriage, we also had to help guide our kids to do the same. Their bonds with other parents were not severed, thank God, but the family links had been broken and it took a huge amount of energy to reform those ties in a healthy way.

We did our best and we thought we covered all the bases, but we aren’t God. There is no way to fix everything for these beautiful kids ourselves. At some point it became a journey that each of our children and God have had to go on together. They have to choose how they feel about their family and their place in it before they can accept the crappy side of a blended family and embrace the happiness of being in one. Some kids come to it gently, others fight against it, and sometimes the ones who struggle the most are the ones we thought were okay. Their world is still exploding in reactions that we can’t see.

Blending a family is hard story to live. We have been at it for thirteen years now. We’ve been to that place where nothing we do is right because they wanted the other parent to be in that moment with them instead of one of us. We’ve been to that place where a child struggles with acceptance even after years of affirmations. We’ve walked roads with them that we never dreamed of when we first decided to bring them into the world. We’ve walked beside them even when they thought they didn’t want us to. We moved over a little bit to give them some space, which was never easy, but we have never ever left them.

Walking those tough roads with the kids wasn’t ever easy, but it takes so much energy to break old bonds and to make new ones that the last thing we wanted to do was cause more breaking of hearts, let alone our own. We tried to be careful, but maybe, some parts of the heart must remain broken, while other parts heal.

I used to say that people shouldn’t stay tied together just for the kids, but looking back, I can’t help but wonder if I was wrong. Of course, the very idea of staying in a marriage that isn’t working is a contradictory thing for someone like me to say. The story changed and it couldn’t be rewritten. Yet, sometimes, when I watch my kids struggle, I wonder if what we did to them was worth it. Did we break our old family bonds, only to break our kids? Or have we really created new family ties that can bind their broken hearts back together?

A few years ago I apologized to my teen daughter for getting a divorce and launching her into this crazy blended life. I had been writing about Peyton, the stepdaughter in my novel, The Real Thing, and I wanted my own daughter to know that, like Peyton, it was okay to feel angry or sad about her situation sometimes. She thought about it for a few seconds, then said, “It’s sad, Mom, but I don’t wish it away because it would be sadder if I didn’t have my brothers, my sister, and all my parents in my life.”

I wish I could say, The End, and let my daughter’s comment be the happily-ever-after my heart craves, but I know our family’s story is not over yet. Maybe that’s why I find myself writing novels about families that need a lot of tying back together. Perhaps by writing stories about bonds that break and ties that bind, I will better understand how to show my own kids the beauty of love in all its messy glory.

And love is worth it. 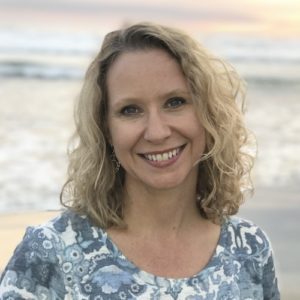 Tina Ann Forkner is the mom/stepmom of three children, all in college, and the author of The Real Thing. When she isn’t writing or traveling with her husband, she works as a substitute teacher in Cheyenne, Wyoming where she has lived for twenty years.