The Allure of Anticipation: A Southern Perspective 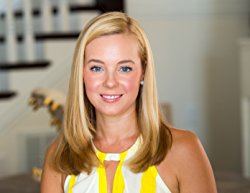 Today our own Kristy Woodson Harvey, Author of Dear Carolina, Lies and Other Acts of Love, and the upcoming Slightly South of Simple takes us on a trip down memory lane as she remembers the anticipation during the Christmas season of her youth. This sweet anecdote could find itself nestled cozily in any of Kristy’s wonderful stories, and the Tall Poppies are happy to share this holiday narrative with our readers.

I know the feeling of wanting to be something that you know in your heart is totally unrealistic, of pining for a life that will always narrowly escape you. For some little girls, it’s the dream of being a princess, of discovering that perhaps your parents are the king and queen of some far-off country. Or that maybe, finally, you will dive into the swimming pool, and, instead of just your regular old feet driving you to the bottom, your will suddenly develop a mermaid tail.

For me, it was none of those things. I didn’t want to be a mermaid or a princess. No, my wish was much simpler. I wanted to be a Catholic. Despite the fact that we were Episcopalian—Southern Episcopalian at that, which I believe carries with it an entirely different set of traditions, responsibilities and realizat 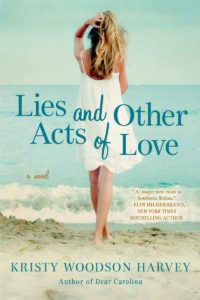 ions that this is your religion for life—my parents sent me to Catholic school.

They wanted me to have the benefit of learning to diagram a sentence and master perfect penmanship under the tutelage of Sister Mary John, to grow up with a strict code of morals and values, like the virtue espoused by Sister Josephine that there is no such thing as a “white lie” in the eyes of God. (I am comforted by the fact that she is gone and could not have read my latest novel in which contradicts this idea.)
I watched with envy as the Catholic children donned their white gloves, veils and dresses for their First Communion, were cleansed each week as they told their sins to the priest, were a part of a club that I understood, as a Protestant, I would never be a part of.
Don’t get me wrong: I was never treated as “less than” in the confines of my school. If anything, it was the opposite. Sister Mary John might have dedicated her life to Christ, but, like any good wife, she knew how to balance a checkbook. Non-Catholic children paid higher tuition, and we were catered to as such.
Never was my desire to enter the realm of my Catholic peers stronger than during Advent. Every week, I would sit in Mass and watch as an acolyte (Another role that, as a mere Protestant, I could never hold in the Catholic church.) lit one of the five candles in the Advent wreath. There were four purple candles, one for each week leading up to the blessed event, and then one pink one in the middle, to be lit on the occasion of Christ’s birth.
I have to admit that on those late Friday mornings, with the smell of greasy grilled cheese and canned chicken noodle soup rising up from the church basement, my stomach growling in anticipation of what awaited me after church, that pink candle had me dreaming of Christmas Eve dinner with my family at my parent’s house, of opening gifts afterward, of Santa coming, in all his glory, the next morning. 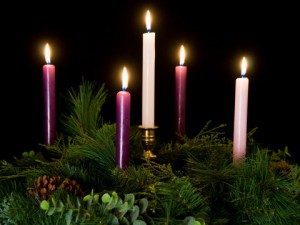 The weeks in which those candles were lit seemed interminable, dragged on for what seemed like months and months. The anticipation would nearly kill me, it felt like at the time.
In retrospect, that anticipation was the very best part of the holiday season. To this day, I realize that I have an odd respect and wish for anticipation of that sort, a feeling that is adequately provided for me daily being a writer, waiting to hear if my next book has been bought, if my editor liked the idea, if the novel itself resonated with readers, how many copies have been sold, and hundreds if not thousands of other daily minutiae that tie my stomach up in knots in the best possible way.
Now, decades later, that feeling of anticipation, is something I try to create for my five-year-old, not only through traditions and rituals that mark the passage of time, the coming of our favorite season. We have a beautiful Advent calendar downstairs, a gift from my mother that is, quite frankly, the bane of my existence some days. Because, you see, though I may be a creator in a lot of ways, I am not a crafter. And every opening of a window, every day of Advent, extols the virtue of some homespun treasure. Make homemade cards to send to neighbors. Create your own snowflake Christmas ornaments out of cut paper.
But my son loves it, and I can see in his eyes, when he opens another window each day, that he is counting down the days until Christmas, until all the family is together again and Santa makes his arrival.
Last Sunday, we sat in the back row of our, yes, Episcopal church. And I was excited to see that they had an advent wreath, much like the one that caused all those butterflies all those years ago. As they lit the second candle, my little son looked up at me and said, “Mommy, is Christmas ever going to get here?” And, although, in my grown-up life, time flies far too quickly, this season seems to be gone in a blink of an eye, I can relate to that feeling, I can remember the magic of it, I am inexplicably happy that my son feels it too.
And I realize all at once that maybe my mom was right all those years ago when she told me that I didn’t need to be Catholic to have the feeling of anticipation welling up inside of me. Maybe, instead, I needed to design a life that filled me with wonder and a sense of expectation. And so, I have to consider that maybe that I life I had always dreamed of? Maybe it didn’t escape me after all.