This week on Tuesday Chat we have author Aya de Leon, author of the Justice Hustlers series, former member of The Debutante Ball, and Independent Publisher Award winner for her debut Uptown Thief (Kensington 2016). I pretty much love everything she does (twitter, essays, books), so I’m delighted to have her here on the Tall Poppy blog. -Katie Rose

Sisterhood Is Powerful: How I Unconsciously Wrote Four Pairs of Sisters into my Heist Series

I was raised as an only child. Yet when I created my debut novel’s protagonist, Marisol Rivera, the heart of her character was formed by the need to protect her younger sister. Now that I’m three books into the series, I can see that I’m writing obsessively about pairs of female siblings. In book two of the series, the protagonist Tyesha Couvillier is shaped by her older sister’s catty rejection. Finally, in Book three, yet another pair of sisters are the co-protagonists, Lily and Violet Johnson. The pair are Trinidadian immigrants, one arrived on a student visa to go to prep school, and the other came illegally and became a stripper. What is it with me and sisters?

So, as I mentioned, I was raised as an only child. My dad had other daughters, but some I didn’t meet until I was in my twenties. For a few years in my teens, I had two stepsisters. They lived with us half of the time. My mother and their dad broke up, so that sisterhood was short lived. From time to time, I see those young women out in public. We never know how to explain the connection: we used to be sisters.

I had another stepfather, with whom I’ve remained close. He remarried and has another daughter who is twenty-five years younger than me. Yet I call her my sister, even though we’re not bonded by blood and are no longer bonded by marriage, plus I’m black and she’s white. But she’s still my sister.

Mostly, as a kid, it was just me and my mom. My mother had me in her late twenties, and in some ways she still had more maturing to do. When you have a single mom who’s a young adult, there’s a reality that the two of you grow up together. In that way, my mother and I have a sense of sisterhood.

My mother had one sister. Their dad—my grandfather—was an alcoholic, and their sibling relationship was fraught. When they were small, my mom was the protector. Increasingly, as they got older, my aunt was the catty one. They were of mixed racial heritage, Latina and white. My aunt was definitely the one who passed for white. My mom took her mother’s Spanish surname and asserted her Latina identity. It’s as if the three major protagonists in my series are living out a single strand of the sibling relationship between my mother and aunt: protection, competition, cultural assimilation.

I call my novels feminist heists, so ultimately the central plots are about women working together. They also have to depend on each other and take huge risks for each other. I hope that they exemplify the best of sisterhood, as well. This is in line with the old school feminists slogan “sisterhood is powerful.” They’re speaking to the deliberate decision that women can make in a sexist society to support other women, affirm other women, gravitate toward other women, and in an era of sexual violence accusations, believe other women. It is an expression of solidarity. Yet being female doesn’t guarantee that we will back each other. If nothing else, our recent presidential election taught us that. The reality of sisterhood is more complicated than simple solidarity.

In a dangerous family or society, how do sisters negotiate violence? One of the most iconic moments of sisterhood in recent popular culture was in The Hunger Games when Katniss protects her younger sister: “I volunteer as tribute.” Similarly, my protagonist Marisol from Uptown Thief, makes herself a target for their abusive uncle because she knows the violence would crush her younger sister. In both cases, the older sisters step up because they at least have a chance at survival. I see these sacrifices as heroic.

Yet other sisters act as shock absorbers, and far less heroically. In my second book, The Boss, Tyesha’s sister has mistreated her for years, but eventually we come to see how she’s passing down some ill treatment that came from their parents. And even in decades of nasty attitude and shady behavior, she’s still cushioned some of the full force of the blow.

Finally, in my third book, The Accidental Mistress, the book opens with the assimilated Violet on the verge of marrying an African American millionaire and securing her success in the American Dream. She is equally certain that her undocumented stripper-organizer sister will not be invited to the wedding. But a case of mistaken identity causes Violet’s perfect life to crumble, and she learns that being “the good one” doesn’t always guarantee a desired outcome.

This feminist heist series is called “Justice Hustlers,” and is published by Kensington Books. They’re categorized as urban women’s fiction, and have strong romantic arcs along with the heist plots. They have typical urban fiction covers, a single ultra-sexy woman on the cover. I’m excited that this third book—The Accidental Mistress cover revealed here for the first time!—has both sisters, Violet and Lily. It perfectly reflects the class and color differences between them.

Because our culture is always ranking women, there’s something fascinating about women who come from the same two parents. Although none of my sisters have the same two parents—I am my mother’s only daughter, and she is the main force that shaped me. So perhaps that is part of the fascination of sisters for me. Any differences between me and my sisters can be attributed to having different mothers (and in the case of my stepsisters, different fathers, as well). I’m curious about what it would be like to have someone who was both genetically similar and raised in the same family. But I’ll never know.

In the last fifteen years, I’ve gotten closer to one of my younger sisters, even raising her for some of her latter teens. When my sister was heading into her mid-twenties, I became a mom, and now have an eight-year-old daughter. She says she wants a baby sister. She never requests a baby brother, although I suspect she would settle for one. But in the interest of maintaining my writing, saving my marriage, and keeping my sanity, I won’t be having any more kids—we’re one and done. So I’ll have to keep exploring my fascination with sisters by way of my novels. Fortunately, my fascination with it seems unending. 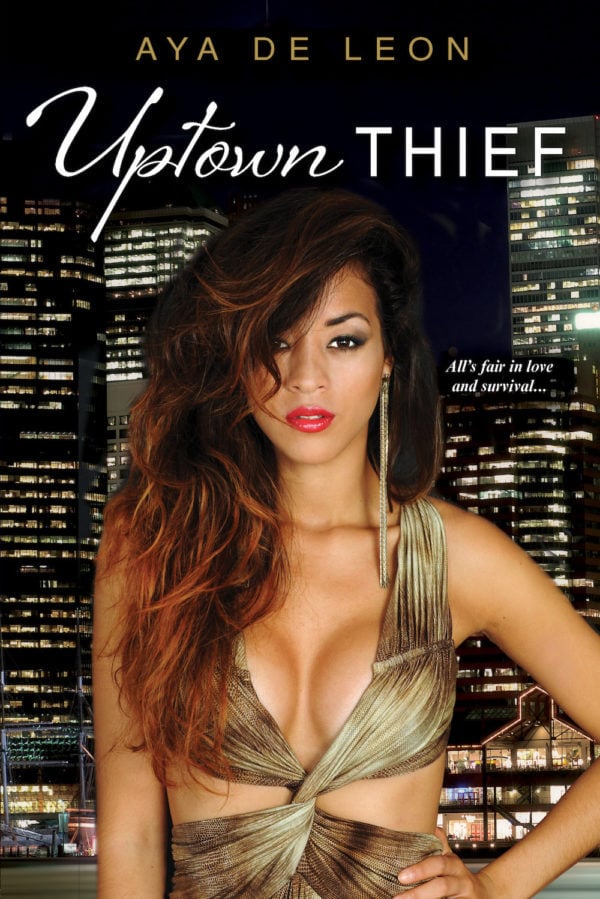 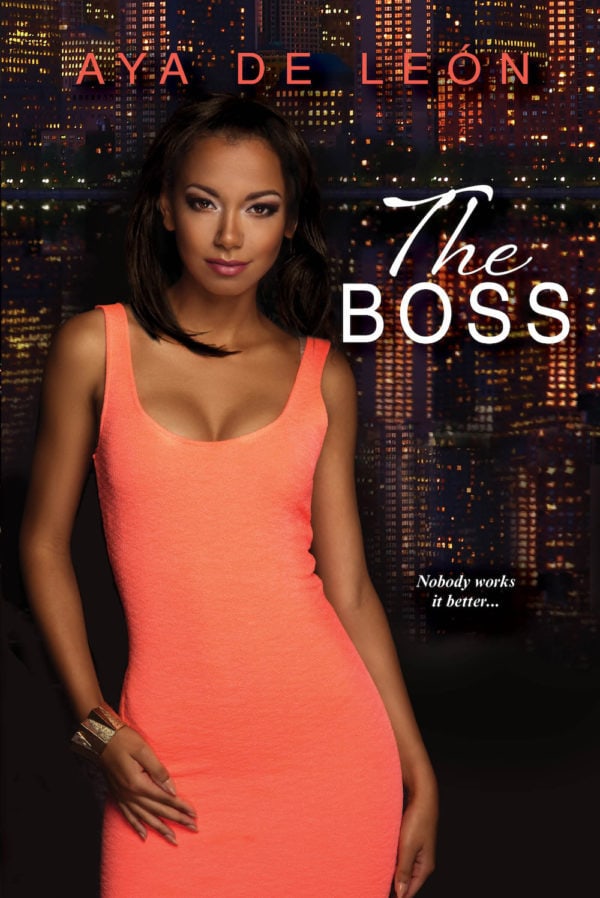 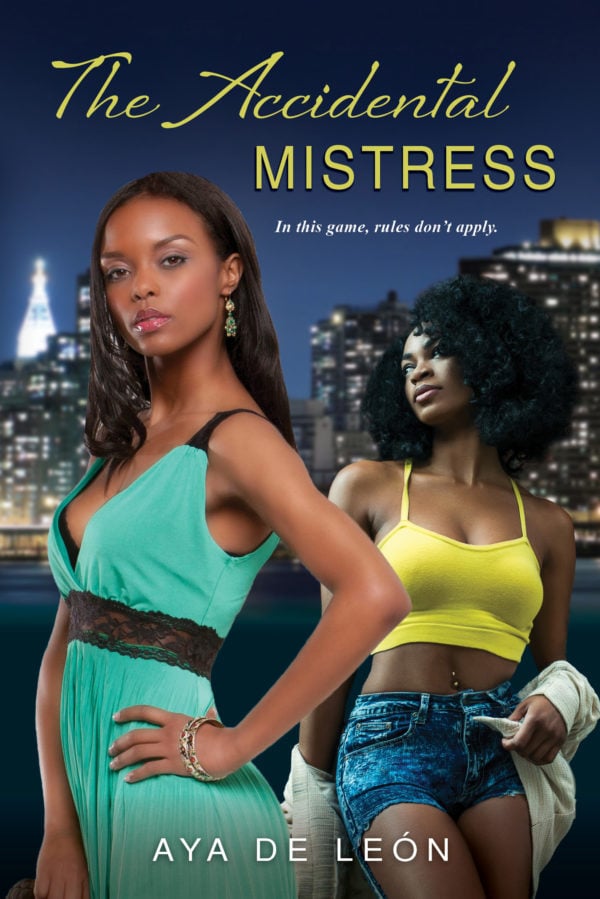 Check back on the Tall Poppy Blog my upcoming review of Uptown Thief for our #Prefrieday Reads feature. -Katie Pryal 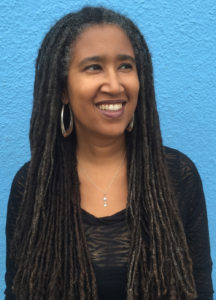 Aya de Leon teaches creative writing at UC Berkeley. Kensington Books published her debut feminist heist novel, Uptown Thief, in 2016, which won first place in both the Independent Publisher Awards and the International Latino Book Awards. The Justice Hustlers series continued with The Boss in 2017 and The Accidental Mistress will be published in June 2018. Her work has appeared in Ebony Magazine, Guernica, VICE, Writers Digest, The Toast, Bitch Magazine, Mutha Magazine, Hip Mama, My Brown Baby, Essence, Huffington Post and on Def Poetry. She has received acclaim in the Village Voice, Washington Post, and San Francisco Chronicle, among others. She is also at work on a YA black girl spy novel called Going Dark. She blogs and tweets about culture, gender, and race at @AyadeLeon and ayadeleon.com.