Yay! It’s Tuesday Chat again. This week I have a special treat: my friend Emily Colin, whom I went to college with 3242334 years ago, has joined me for an interview. Emily’s latest novel is The Dream Keeper’s Daughter, which Publisher’s Weekly calls, “A splendid mix of time travel, romantic yearning, and moving on after grief.”

KRGP: Emily! It’s so great to talk to you. Tell us your favorite thing about your new book, The Dream Keeper’s Daughter. Is it the cover? Because that’s a spot-on cover.

EC: I do love the cover! But you know, my favorite thing about my new book is that it came to be, at all. When the book came out this past summer, it had been five years since the publication of my first novel, The Memory Thief. I was beginning to think I might be a one-hit wonder, like Devo or whoever sings Jesse’s Girl. But then I had the idea for The Dream Keeper’s Daughter, my publisher liked it, and I researched and imagined and wrote as fiercely as I knew how. When I held it in my hands for the first time, I thought, This is a miracle.

So, that’s my first favorite thing. My second favorite thing is the fact that I somehow managed to combine mystery, love, rebellion, time travel, hot sex, archaeology, judo, and contentious Caribbean history between two covers. Never make it easy on yourself, that’s my motto.

KRGP: Most people don’t know this about us, but we went to college together. Not only that, but we took fiction writing together. What a small world! Although we have lots of juicy stories, they’re not fit for print. Tell us one story about writing that you don’t mind the whole internet reading.

EC: Here’s a story about writing’s traumatic aftermath: The day of The Dream Keeper’s Daughter’s launch, I woke up with a horrible cold and severe laryngitis. I couldn’t utter a word. Not to worry: I had several hours before I had to be at a brand-new bookstore in Winston Salem, four hours’ drive away, for my first reading. Surely I could regain my voice by then. I gargled hot water and devoured cough drops like it was my job, all the while packing for a week-long trip: The morning after the event, my son, my friend, and I were flying to the Romance Writers of America conference in Orlando. I shuddered to think how I was going to make it through the five-day conference without my voice. Even worse, I couldn’t imagine how I was going to croak my way through the podcast I’d committed to recording prior to the reading that night. But I am nothing if not stubborn, so the three of us climbed into my Subaru and headed down the road.

An hour and a half into our drive, my car broke down—an abandon-the-highway, limp-into-the-closest-small-town-mechanic sort of breakdown. They couldn’t fix it. We were in the middle of nowhere, with no car rental place to be found. And I, who had managed to restore my voice to some level of functionality, obliterated it completely in the maelstrom which ensued. We ended up driving very slowly down the highway for another hour, wherein we left the car at the Raleigh Subaru dealership, rented the only car available—a gigantic SUV—and drove hell bent for leather for Winston Salem. We’d already missed the podcast; I’d be darned if we’d miss the reading too. But it felt like a fool’s errand: Between talking to two separate mechanics, the Enterprise rental folks, and my fellow podcaster, I could only manage a hoarse croak. Worse still, I’m phobic about highway driving, but because I’d rented the car, I had to drive it—between Raleigh and Winston Salem, two fairly major cities, in rush hour traffic.

In between coughing fits, I tried comforting myself with platitudes: What doesn’t kill you makes you stronger. And, It’s always darkest before the dawn. I tried irony: How fitting that I was making such a massive effort to get somewhere in order to speak, when my voice had vanished. I tried thinking about all the ways I would turn this into a funny story. But I kept coming back to a German word I’d read somewhere recently, Backpfeifengesicht. I’d fallen in love with the word, which meant ‘a face that should be slapped.’ This day was that face, and oh, how I would have loved to backhand it a good one.

My reading was at six. I pulled up in front of the address of the brand-new bookstore at 5:58, parallel parked the gigantic SUV like a champ, leapt out of the car—and stared. There was no bookstore. In fact, there was no storefront with that number. It was like Platform 9 —the address didn’t exist.

I was speechless—rather a good thing, given that I had no voice with which to speak. Wearily, I pushed open the door to the closest shop and inquired in my barely-audible croak about the imaginary bookstore. Oh! the employee behind the counter said, grinning. We get that all the time. The address will be next door to us—it just isn’t yet. There’s an alley that’ll cut through, but it’s closed off now. You have to go around the block.

Of course I did.

I summoned what remained of my resilience, dashed around the block, and skidded into the bookstore with thirty seconds to spare. The event host took one look at me and offered me a glass of wine—which I refused in favor of the bathroom, as I’d been guzzling liquid for the past eight hours in a vain effort to restore my voice.

I pulled myself together and went out to address the audience—who I was grateful to see. There’s nothing worse than arriving at a reading to discover that it’s only you and the bookseller, staring dumbly at each other as if you’ve ended up on an accidental blind date. Heartened, I began to speak—about my research, the book itself, my writing process. I talked and talked, forcing my broken voice beyond the boundaries of what I thought possible.

I made it to the very end of the reading, through the Q&A and the signing. Relief washed over me. All I wanted was dinner at my favorite area restaurant, but when we got there, naturally it was closed. No matter; at that point, I would have happily devoured my shoelaces. The dealership magically fixed my car overnight. We drove the rental car back the following morning, got my Subaru, drove it to the airport, and boarded the plane for Orlando. I felt as if I had survived my own personal tiny war.

But then I thought—writing is all about endurance. It’s not a sprint; it’s not a sport for the easily intimated or the give-uppers amongst us. And if this was how I’d started my new book’s career—as a soldier in a microcosmic, winnable battle—then so much the better.

Perhaps it was a good omen, after all.

KRGP: Wow! What an incredible story. I’m so glad we’re doing this interview so I got to hear it. Next question: You’re a full-time writer, which is pretty awesome. What else do you write besides novels? If you’re not writing a novel, what’s your favorite thing to write?

EC: Hmmm. I write articles for magazines. Occasionally I write a blog post; I’ve promised myself to get better about this in 2018. Sometimes I write short stories—which are way harder than novels, in my opinion. Not too long ago, I wrote a white paper for the North Carolina Arts Council on the state of arts education for youth in need—one of my passions. And I write texts—a lot of them. If I’m not working on a novel, satirical texts that mock the state of my existence—and existence in general—are probably my favorite thing to write. Humor is my escape when life grows grim.

KRGP: We reconnected years after college at a writing retreat. Sometimes getting away from the dog, the cat, the kids, the whatever is the only way to get work done. I think I wrote half a book that week. Where is your favorite place to write? Did you go write in Barbados (where half of your new book is set)?

EC: This is going to sound horribly unimaginative, but my favorite place to write is my couch. I mean, I love going on writing retreats, and I tend to get a lot done simply because of the lack of distractions. There’s no one yelling Moooommm I’m starving where are my pajamas I can’t find my homework etc. But when you go on a retreat, you’ve got to do all kinds of preparation—pack, travel, figure out who will take care of the animals and take the kid to school. Then you get there and it’s lovely, but there’s an adjustment period.

I did go to Barbados to research my new book—which is partially set in modern-day Charleston and partially in 19th century Barbados, around the time of the slave revolt—and I spent many hours in libraries and museums, looking at primary sources and 1816 newspapers on microfiche. Then I spent an equal amount of time as a tourist, seeing the island as a sort of overlay—modern commercialism atop the intricacies of the past. It was amazing, but I researched more than I wrote. I got home and spread my research out on the dining room table, and I read and read and read. Then I curled up on my couch with my laptop and my dog, and started writing. I put on music and fell through the hole in the screen and it was great.

By the end of a typical day I’ve become a central point around which chaos revolves—there’s me, and then there’s the dog to the left and the cat to the right, and in front of me is a half-empty coffee cup and a stack of research materials and a plate and my phone. Come to think of it, it’s a perfect metaphor for my life. 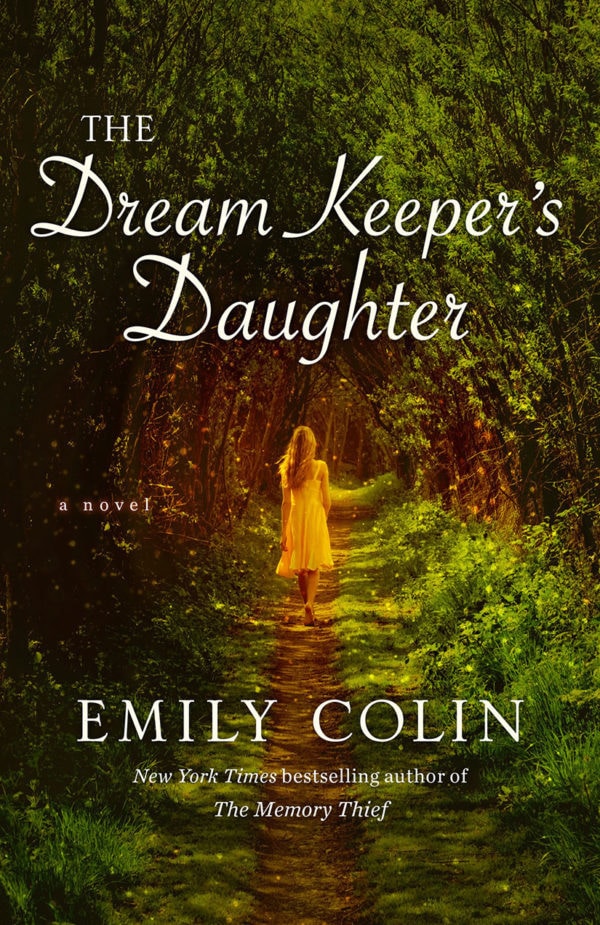 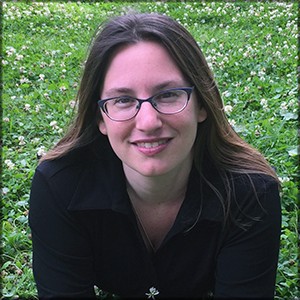 Emily Colin’s debut novel, The Memory Thief, has been a New York Timesbestseller and a Target Emerging Authors Pick. Her diverse life experience includes organizing a Coney Island tattoo and piercing show, hauling fish at the Dolphin Research Center in the Florida Keys, roaming New York City as an itinerant teenage violinist, helping launch two small publishing companies, and serving as the associate director of DREAMS of Wilmington, a nonprofit dedicated to immersing youth in need in the arts. Originally from Brooklyn, she lives in Wilmington, NC, with her family.

Emily is excited to share that she has a second novel, The Dream Keeper’s Daughter, upcoming from Ballantine Books in July 2017. She loves chocolate, is addicted to tiramisu, and dislikes anything containing beans.